What Does Sequestration Really Mean?

What Does Sequestration Really Mean?

If you have been watching the news then you know that the federal government is going to be required to cut $85 billion out of their budget unless congress passes a law to avoid or change it before March 1st.

$85 billion is a heck of a lot of money. It’s so big it’s hard to understand what it really means. Here are a few comparisons that might make sense.

With $85 billion the government could buy UPS, which currently has a market cap of about $78 billion. That’s about the 70th largest company in the world. Wowzers.

It’s also enough to send every single household in America a check for $642.42. Instead of cutting that spending, the government could reduce spending elsewhere by $85 billion, and then send everyone those unique personal checks. Talk about stimulating the economy!

This $85 billion sounds like a whole lot of money. Heck, it sounds like so much maybe this will solve our debt problem and return America to financial sustainability.

$85 Billion is a Drop in the Bucket for the U.S. Government

Let’s pretend that we actually go through with cutting $85 billion out of the federal budget (which I personally can’t possibly see happening. Politicians always kick the can down the road).

To make it easier to understand, let’s scale the numbers to reflect a typical American family. 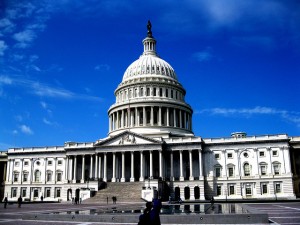 The U.S. Government is like a family that currently has $166, 217 in debt. That’s a lot of debt, and unfortunately the family only makes $29,000 a year (tax revenue). To make matters worse, this family spends $38,000 a year (federal spending), meaning they have to go $9,000 deeper in debt every year (federal deficit) just to pay their bills.

Unfortunately the federal government isn’t serious about fiscal responsibility. The sequestration cuts are less than 10% of our current deficit. We’d still need to cut another $815 billion just to stop borrowing money.

This has a serious impact on your personal finances. If the government becomes financially insolvent then you and your family won’t get social security or medicare when you get older. If US government debt gets downgraded again then many “safe” investment vehicles like treasury bonds will become very risky and could lose money.

The US government needs to make drastic spending cuts to become financially solvent (and no, $85 billion isn’t drastic) or else we could be in for a world of trouble when our federal government can’t pay its bills.

Readers: Are you worried about the US government’s spending problem? If not, how much further in debt can the country go before you’ll start to get worried?