Today is yet another edition of Whatever Wednesday, where my twitter followers and facebook fans tell me what they want me to write about. I do whatever my fans say. Because I care.

This week’s article is brought to you by the letter “C”. I’m talking ugly Christmas sweaters, investing, toilet paper, Cardinals baseball, net worth, and Christmas spending. 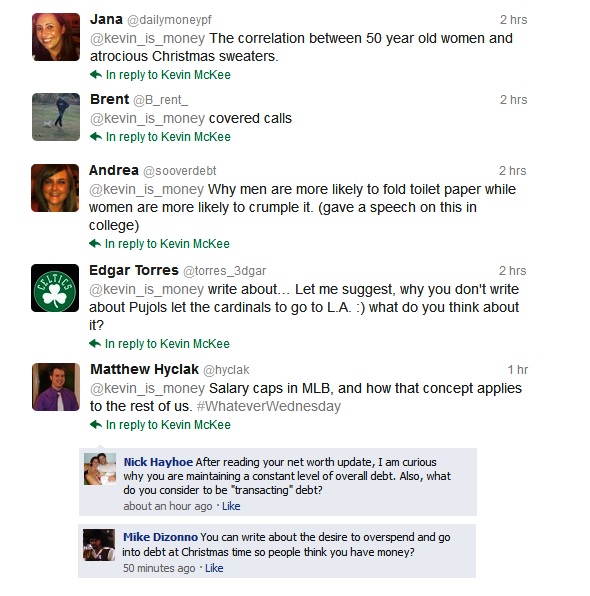 Jana wants me to talk about old women and Christmas sweaters. There’s really two topics here. Women who wear the sweaters, and women who give the sweaters as gifts to young people.

I’m actually all on-board with the women who wear the sweaters. In fact, I get worried when a woman over 50 is not wearing a sweater with reindeer or snowflakes on Christmas Day. That’s just how the world works. 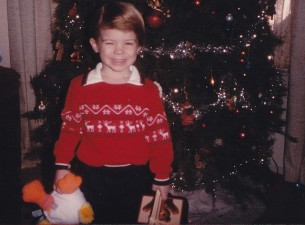 My problem is when the sweaters are given as gifts to young people. First of all, no young person ever needs a Christmas sweater. Second of all, who buys a gift that is inherently useless for the next 364 days? If you want to give me a Christmas sweater, maybe you should give it to me BEFORE CHRISTMAS!!! Has anyone ever been excited about a gift that says, “Here’s something to collect dust in your closet for 11 months, only to embarrass the crap out of you when you wear it next December.”?

Writing covered calls is a great way to make extra money with your investments. It’s really a win-win if you decide to do it. It’s a complicated process and I can’t explain it in a paragraph or two, but basically you can get paid for doing nothing, or you can get paid for selling your stock at a price you think is fair. You can’t lose money with covered calls; you can only lose an opportunity to make even more money. Confused? Let Suze Orman explain:

So yes, I love covered calls and I should actually do more of them in my own investing. Beware though, because trading with options is very risky and you can lose a lot of money, especially if you don’t know what you’re doing.

I can honestly say that I have no idea why men fold toilet paper more often and women scrunch more. I don’t even know if that’s true. All I know is I used to scrunch when I was younger, and now I fold. Maybe I was a girl back then, but I’ve since grown into a man? Who knows?

MLB: Pujols and No Salary Cap

Here are a few baseball questions. First, I’m from St. Louis and am a Cardinals fan. I’ll be honest: I’m okay with Pujols going to the Angels. He’s a great player, but the Cardinals don’t have Yankee money. If you give Pujols a 10 year deal and he isn’t absolutely incredible for all 10 years, you don’t have the money to fix the team. I don’t blame him for taking more money with the Angels, and I don’t blame St. Louis for letting him go.

As far as the salary cap is concerned, there essentially isn’t one in MLB. How this applies to the rest of us? Well, it really doesn’t. Some people might argue that it makes tickets more expensive, but I disagree. A MLB team is going to charge as much as people are willing to pay for tickets, whether they spend $20 million or $200 million on player salaries. They aren’t going to lower prices if they pay less for player salaries; they would just take increased profits. If that’s how MLB owners and players want to handle their compensation, that’s just fine with me!

What am I Doing with My Debt?

Nick had some questions about my net worth after I posted the Race to $1 Million yesterday. Why isn’t my overall debt decreasing, and what is “transacting debt”?

My overall debt hasn’t decreased in the past few months because I’ve been spending more on my credit cards every month. For example, in months where I buy plane tickets for Christmas and New Year’s travel, I’m going to have more debt that month because I purchase things on my credit card. I’ve been spending more the last few months, which is why the overall debt has stayed flat even while I’ve been paying down student loans.

Which brings me to the next point. Transacting debt is anything I charge to a credit card that is paid off before I’m ever charged any interest. I basically use my credit cards as debit cards and pay them off every month, but I like the rewards I get with the credit cards. Make sense? Good.

Buying Too Much at Christmas

There are a lot of people who overspend at Christmas. I’m not one of them. I get a little something for everyone in my immediate family, and my extended family draws names out of a hat and you only get gifts for one person instead of everyone. I would never try to “prove I have money” with expensive Christmas gifts. Does anyone else think it’s weird that our culture says we should never talk about how much money we make specifically, but we should DO EVERYTHING WE CAN to give people an impression of how much we make.

My philosophy on Christmas gifts: if you love someone, get them something they will like that isn’t too expensive. That’s it.

Remember: if you want to tell me what to do, just make sure to follow me on twitter and facebook and tell me next Tuesday! The more interesting the topic, the better!