I have good news and I have bad news.

The good news: I beat The Hoff this month and my net worth went up!

Here’s the slightly belated scorecard for the beginning of December, 2011: 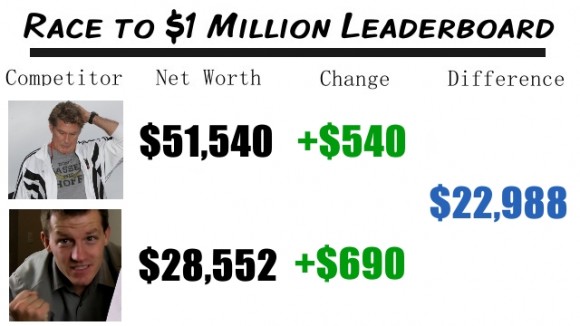 But I’m still behind by $23k. I wanted to close the gap to $20k this year, and with only one month left that’s probably not gonna happen.

I also know that he’s gonna spend a lot of money on a wedding next year, but he’ll also get to start including his wife’s net worth and income in these updates once the marriage is complete. I sure hope his wife isn’t rich, or this race to $1 million could end about 15 years earlier than I expected it to.

Until the marriage happens, I do have one big thing going for me that The Hoff doesn’t have: my website is starting to make a little bit of money. I’ve pulled in a little over $2,200 in blogging revenue in the second half of this year (although I have about $2,700 of blogging expenses, mostly giveaways to you guys).

In 2012, I should be able to maintain the $2,200 per six months, and potentially even increase that amount if I work harder at generating income, or just get a lot more followers and make the ads space more valuable. I think I can realistically make something like $5,000 in profit next year from this little hobby of mine. Not too shabby!

The point is, I have two income sources and The Hoff only has one right now. So at least until he ties the knot, I should be able to continue my trend of beating the crap out of him every month.

A few more things about my net worth:

One of my student loans that I really hate has been double charging me for the last three months. Maybe they are reading my blog and think they are getting revenge on me by making me pay an extra $111 every month. Honestly, I don’t care. It just helps me pay it down faster. I’m not gonna call and have them fix it: I’ll just pay extra and get it paid off sooner.

I Need a Hot Stock Tip

Another place I could pull away from The Hoff is in the stock market. When 2012 rolls around, I’m going to have to start picking investments for my Roth IRA again. If any one of you out there has a hot stock tip, post it in the comments below. Maybe you’ll convince me that you picked the right company, and we can be investment buddies!

The Rest of the Story

Here’s the rest of my net worth story this month. The only big change is the addition of physical assets. This is the first time I’ve had any physical assets, which I’m holding in the form of junk silver. Yay for being prepared for the end of civilization!