Who Will Win the Presidential Election?

Home/Blog/Who Will Win the Presidential Election?

Who Will Win the Presidential Election? 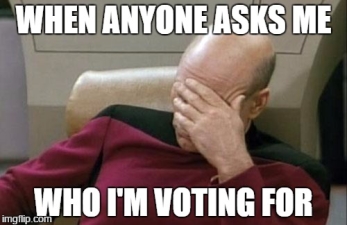 I suppose I’ll tell you this time.

Well, it seems to be time for another update regarding the presidential election.  Unless you’ve been living under a rock you’ve probably found out that the two main parties have managed to choose their candidates for president.  Hillary Clinton is running for the Democrats, and Donald Trump is the Republican nominee.  The GOP seems to be of two minds about its candidate.  Bill Kristol recently tweeted, “Official position of the leadership of the Republican Party: Trump is an inexcusable bigot, and Trump must be our next president.”  While officially these are not yet the nominees, I have bad news for those of you holding out for other candidates.  It isn’t going to happen.

As I’ve mentioned before, in my estimation the best way to tell which candidate is going to win an election is to check prediction markets.  While these don’t tell you who will win, just who is likely to win, I find it to be a good starting point. Prediction markets like PredictIt give odds on specific events, usually political events.  Long story short, we’re looking at the latest price at which a candidate was traded.  That value in cents expresses the probability that a candidate will win the election.  In this case a picture is probably worth a couple hundred words:

This leaves Hillary Clinton with a 2/3rds chance about winning the election and Donald Trump with a 1/3rd chance of winning the election.  You’ll notice that the probabilities given here do not precisely add up to 100%.  I’ve discussed this in more detail elsewhere.  The chances of the candidates with small values as their latest trade is probably overestimated, though I think that it is telling that we are more likely to see a Johnson White House than a Romney.

Why is Clinton More Likely to Win?

Hillary Clinton is a moderate democrat, and while Donald Trumps political views are sometimes unclear, moderate doesn’t seem like an appropriate word for him.  The economy of the country is currently doing well (unemployment is roughly at 5% and most economic indicators I’m aware of are good).  This is generally helpful for the party of the sitting president.  Of course if you looked at the 2008 election in June and had to guess what was going to happen you might have argued the same thing.

Who will I vote for?

Donald Trump is not a libertarian leaning republican.  Though honestly I don’t know if Donald Trump has any core beliefs.  I haven’t seen any substantive policy proposals from him, though I’d be prepared to be proven wrong.  His behavior in the past regarding eminent domain suggests to me that he just doesn’t take property rights very seriously.  His talk on free trade agreements indicates to me that he is pushing a protectionist or mercantilist view of trade.  His most talked about policy proposal, that we build a wall between the US and Mexico indicates to me that he isn’t in favor of open borders. There is a libertarian wing of the republican party, but Donald Trump seems to want to trade us for a nationalistic blue collar base.  He will not receive my support in November.

Hillary Clinton doesn’t seem to be a libertarian leaning democrat as much as she seems to be a moderate democrat.  I might call her a republican leaning democrat before I called her libertarian leaning.  She too has made comments about free trade that make me nervous.  On the other hand, I’m not sure she actually believes them.  Generally, I think candidates who claim to agree with me are lying about it, and secretly have other positions.  I don’t generally trust republicans or democrats who claim to want to cut spending for example.  In the case of Hillary, I’m not sure that she doesn’t agree with me and is simply lying to court her base.  Unless Hillary Clinton makes some substantial changes to her arguments before November, and I ascertain that those changes are genuine, I will not be supporting her.

That leaves me with Gary Johnson.  While he is a more moderate libertarian than other libertarian candidates for the nomination, he’s a candidate that I can live with.  I’ve come to accept that most people in the country simply don’t agree with my view of what the federal government should be, and would prefer to have a larger state that provides more services and is more involved in conflicts around the world.  I’m under no illusions that Gary Johnson will win the nomination.  The election may turn out to be close, and Johnson may obtain a large enough percentage of the vote to swing the election (as Nader did in 2000).  I believe that will indicate to the larger parties that there is a sizeable part of the electorate up-for-grabs and unsatisfied with the platforms of the major parties.  I think that this will give libertarians a larger voice if the two major parties attempt to court them.

But that’s it.  Who will win, probably Hillary Clinton.  What will be the political landscape post-election?  I have no idea.

Who are you planning on voting for?  Are you satisfied with the choices?

Spread the love
By Adam Woods|June 17th, 2016|Categories: Blog|Comments Off on Who Will Win the Presidential Election?