Who Will Win the Presidential Nomination (Remix)

Who Will Win the Presidential Nomination (Remix) 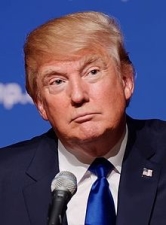 Well, with the early states in the presidential nomination behind us I thought that it’d be a good time to check in on who will win the Democratic and Republican nominations.  At this point Donald Trump is ahead in the Republican nomination process and the nominee count for the Democrats is naturally confusing.  Including superdelegates Clinton is distantly ahead.  Excluding superdelegates Sanders and Clinton are tied.  When measuring who’s “winning” the best I’ve been able to tell is that superdelegates count if you’re a Clinton fan, and don’t really matter if you’re a Bernie fan.  Now this is all fine and interesting, but who will actually win the nomination?

The best way to get a guess at who will win the presidential nomination is simply to look at the prediction markets.  When someone tells you who they think is going to win, they’re often just telling you who they wish would win.  When someone is willing to put their money where their mouth is, that actually gives you some information.  Better yet, as time goes on, money is transferred from people who are bad at predicting who will win an election to people who are good at predicting who will win an election.  Over time, regular losers stop playing, and regular winners have more of an impact.

What does the prediction market say? 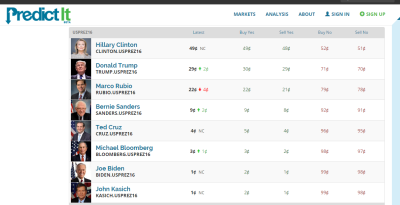 Those of you who read this blog regularly might remember that there was a trick to reading PredictIt’s numbers.  It used to be that the calculation was more complicated, but PredictIt changed their method of accounting in these markets and now the “Sell Yes” price translates fairly directly to a percentage chance of winning.

Hillary Clinton is very probably going to win the democratic presidential nomination.  At this point she has roughly an 85% chance of winning the nomination.  Sanders on the other hand has, roughly, a 15% chance.

The complication & the opportunity (Warning: Mathy)

So why don’t the probabilities add up properly in the republican contest?  It used to be that these probabilities were further off.  The sum of the probability of each republican nominee winning the republican nomination used to be roughly 200%. Arbitraguers would bet on each candidate to lose the nomination and lock in a mathematically certain profit. A large gap still remained and the explanation used to be that arbitrageurs demanded a ~10% annual return to tie up their money.  In order to ensure that the trading values could be used as probabilities PredictIt changed the rules.  If you set up a mathematically certain profit, they no longer make you wait to earn it.  All money which you are mathematically certain to receive, you can get right away.  This caused a large decrease in the total probability, which now sums to 110% in the republican nomination contest.  This means that if an arbitrageur bets each of six candidate to lose once, it costs $4.90.  When five of the six lose (as they must) the arbitrageur gets $5, earning a 10 cent profit.  Since this profit is mathematically sound PredictIt simply gives you the $5 up front.  If someone other than the six guys you bet “no” on wins (say, Jeb Bush gets back into the race and wins) then you get the other $1 that you weren’t certain to win.

PredictIt charges two fees, a 5% withdrawal fee, and a 10% fee on profits.  Since there is a a 10% fee on profits you need to take that out of the amount you were expecting to make.  You’d think, if we go back to our original example, you’d have to give up 1 penny of your 10 cent profit.  Unfortunately there’s another catch.  You win on five contracts of the six when five of the six nominee’s lose.  You lose on the sixth contract when one of the folks you’re betting against actually wins, and you don’t get to count your loss on that contract against your wins in the other contracts.  This means that you have to subtract your winnings ($5) against your costs on the cheapest five contracts ($3.91), the total “profit” that predictIt charges the fee on is actually $1.09, which works out to $0.11.  So when you take your actual 10 cent profit and subtract off their 11 cent fee, turns out you’re actually losing a penny.  Thus we’ve explained the last bit of mathematical impropriety.

Fortunately, one of the markets is off by enough that you actually can profit.  In the Presidential election market, buying one “no” for each candidate results in costs of $6.86 and winnings of at least $7.  This means a profit of 14 cents, fees will be at most 11.3 cents.  Thus, you walk away with 2.7 cents.  PredictIt pays you within a few seconds of the transaction settling.  Therefore, the plan here is to sign up with PredictIt, deposit $7 via credit card, and bet “no” on each candidate once.  This should result in you ending up with $7.02.  You repeat this until you decide that you have enough money or you hit the $850 ownership cap on one of the candidates. I figure that you can make about $23 this way. You then cash out your $30, predictIt takes a 5% fee and mails you a check.

I’m fairly certain that if you do this your exposure will be negative, however, you are betting up to $850 on each candidate to lose. Perhaps something important could change.  Perhaps PredictIt decides that it miscalculated the amount of money it gave you when it calculated your guaranteed profit. I don’t know.  I wouldn’t buy more contracts than you could afford to lose if something really strange happens.  My understanding of the math, and of PredictIt’s policy is that you simply walk away with a profit and you have no risk.  But it isn’t enough to guard only against the probability of bad things you’re aware of.  You must also be prepared for risks of which you are unaware.  The fact that some random blogger (that’s me guys) doesn’t know of any risks in this operation, is not the same as saying, there are no risks.  If losing $850 per candidate would freak you out, and cause you to complain to the blogger that suggested the whole thing to you–well just don’t do it.  Keep all your money in FDIC insured banks under the insurance limit.

Trump!? If you can vote in a republican primary I strongly suggest you do it. I don’t care if you vote for Mickey Mouse.  Just vote against Trump.