Would You Shock Someone For Money?

I am very disappointed in 96% of you.

Here’s the worst part of the study; each shock was worth exactly one British pound, up to a maximum of 20 shocks. In US dollars, that’s worth about $1.63 per shock, for a maximum potential gain of $32.60.

Let me just tell you that if you were to shock another living human being for what amounts to a 20 oz. Coke at the vending machine at my work, we cannot be friends. It’s wrong no matter how much money is involved, but if two bucks can convince you to do something truly reprehensible, you should really see a therapist. 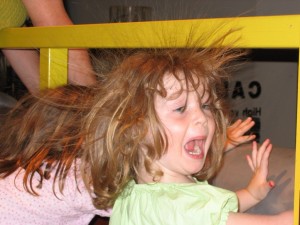 This girl does not approve of the study

I don’t know the specifics about the participants in the study. Maybe they were homeless and poor and hungry. Maybe that $1.63 was going to help them buy their first decent meal in weeks. In this case, it’s still wrong and I’m still disgusted, but at least I could at least see where they were coming from. Unfortunately, I doubt this is the case. I think it was just a situation where people saw an easy way to get some money, so they took it and damned the consequences.

I believe the problem with these people is that they don’t lead a principled life.

When your life isn’t guided by principles, you can justify any action. It is easy to rationalize a decision to fit any situation. In this case, “It probably won’t hurt this guy too bad, and I could use the money, so why not?” People who make decisions by continually rationalizing all of their actions, good or bad, are dangerous. They can be talked into doing just about anything.

I can say with absolute certainty that I wouldn’t give the shock. Why am I so sure? It’s in my mission statement. In fact, it’s the very first entry:

I expect to pass this way but once. Any good, therefore, that I can do or any kindness I can show to any fellow creature, let me do it now. Let me not defer or neglect it, for I shall not pass this way again. -Stephen Grellet

Game over. It simply isn’t possible to rationalize a decision to shock someone for money when you have a personal mission statement with kindness as a core pillar. As long as I stay true to my mission statement, no amount of justifying or convincing will work. I have to be kind and deny the shock and the money.

This is why my mission statement is so important to me, and why I think everyone should have one. It not only makes your life more consistent, but it makes it easier. You no longer have to struggle internally to make difficult decisions; whenever you are faced with a choice, just think back to your mission statement and allow those principles to make the decision for you.

If you don’t have a personal mission statement, I suggest you make one. Feel free to take a look at mine and use it as an example, or make your own however you like. I used quotes from famous people because they are all much smarter than me. However, there’s no right or wrong way to do it; the important thing is just that you write it down.

Now that we are talking about it, I should update my mission statement. I want to add, “I will always punch people in the throat who shock strangers for less than $2.” I think that’s a good one.

Question of the Day: Imagine the same study, but instead of shocking a person, they were shocking a dog. How do you think it would have changed the results, and why?