Why is it so hard to cheat on a test at a community college? Watch the video below and find out (or if you’re at work and can’t watch the video, I’ll give the answer at the bottom of the post).

Remember my first go-round in college? Well I guess seven colleges wasn’t enough, because I’ll be starting classes at #8 on Tuesday.

If you or someone you know is thinking about going to seven colleges, I don’t recommend it. I literally paid $20 to have all my transcripts sent (luckily three schools were free), which is the biggest ripoff in the history of education. Five bucks to send a letter sometime in the next 58 business days? It’s worse than text books. 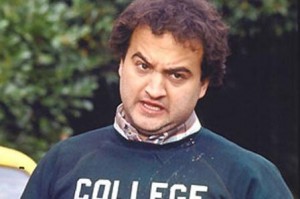 I hope this guy is in my class

Anyway, I’m taking 5 credit hours, which consists of two courses. I think you guys are going to like the classes I’m taking and the reason I’m taking them, so check out my schedule:

Monday Night: Voice Class – That’s right folks! The next time you see one of my original music videos on this site, you may not want to rip the speakers out of your computer in disgust. I’m gonna learn how to sing! Fo’ real!

I’ve been thinking about taking voice lessons for a while now, and this just seemed so perfect. The private lessons I was considering were going to be about $55 an hour. This is $45 for sixteen two-hour sessions. I’m literally paying less than $1.50 an hour for a voice class. I won’t get “private” instruction, but as of tonight there were only four other people registered.

If this goes well, I can sign up for the chorus next fall and take actual private voice lessons through the school. I’m hoping by the end of 2011 I can graduate from “at least he’s kinda good looking…” to “man, he can really sing!”

I have always wanted to learn to speak Spanish fluently, and my desire was strengthened when I was in Spain two years ago. I am insanely jealous of bilingual people, and I don’t want to be that typical American who doesn’t bother to learn another language. This class is actually step one in a two step process.

I have a solid foundation in vocabulary and present tense Spanish. I’m going to use this class to learn past and future tenses and expand on my vocabulary. Then I’m going to put it to use with the greatest program in the entire world…

I’m planning to go to Costa Rica for three weeks this summer to completely immerse myself into a Spanish-speaking culture (and learn to surf at the same time). If all goes according to plan, I won’t speak a word of English for the entire three-week trip. 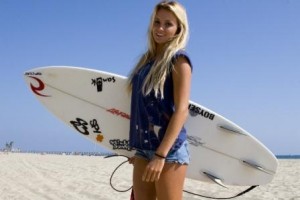 I've called ahead and reserved her as my instructor. I hope she speaks Spanish.

I’ll stay with a host family, take Spanish lessons during the day, and take surfing lessons at night. Rinse and repeat for 20 days. If I’m not at least partially fluent after three weeks, I think there’s something wrong with my brain (which is probably true anyway).

One of my favorite things about my job is I can work hard and play hard. I have the vacation days available, so now I just need to clear a three-week continuous absence with him and then I’m off to Costa Rica! Oh, and my job will reimburse me for the tuition, so my class is free!

And the best part is it will only cost me about $2,600. That includes the flight and basically everything for the three weeks in the surfing village and a three day tour of the capital city, San Jose.

This is gonna be awesome!

Finally, as promised, here’s the answer to the joke if you didn’t watch the video: Why is it so hard to cheat on a test at a community college? Because everyone else in the room is so dumb that they also go to a community college. LOL! I’ll be one of those dummies next week!