I’ve written a lot of posts telling you what is happening in my life and asking for advice. I realized tonight that there’s probably one or two of you who are interested in hearing how things turned out.

Inspired by my brand new logo, here are some follow ups to articles I’ve written in the last few weeks:

Graphic Design is Expensive – I wanted a full header logo, and as you can probably tell, I finally got one. Before you start laughing at it, I’ll have you know I did it all by myself.

Okay. You can start laughing… now.

I actually think it looks pretty good. I wanted my picture up there (because let’s be honest, I’m much better at being good looking than writing) but I didn’t think a regular picture of me would look right. Enter BeFunky. I uploaded a picture, they cartoonized it, and I downloaded it to my computer. I didn’t even have to give them my email address or anything! Then I added the text and an oval, and voila.

The only thing I still want is a “logo” that I could put on a business card. That will have to come in version 2.0. In the meantime, please let me know what you think of this one.

Update: My best friend does photoshop stuff and he’s been helping me tweak the header. It’s gonna keep getting better, and he also said he’s gonna work on something new and cooler than what I have. As soon as I have his second option, I’ll post everything and let you guys decide which is best.

Only Water Challenge – I’m only drinking water for a month, except I’ve kinda already cheated. I had a Jamba Juice for breakfast one morning because I was feeling a little sick and wanted fruit for breakfast. And lets be honest; what 25 year old guy keeps fruit at home? Not this one, I can promise you that.

Aside from that one slip up, I have only had water. It hasn’t been two hard, and I’ve definitely noticed two changes in my life. First, I have exceptionally clear urine. Go team! Second, I definitely spend less money when I eat out. The dollar menu is so much cheaper than value meals. I hope to feel some health benefits by the end of the month.

I also want to give a shout out to Travis at from the My Care One site. He’s doing the challenge along with me and it’s great to have a partner in crime! 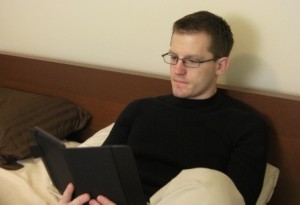 When I want to look sophisticated, I put on my glasses, pretend to read, and take a picture of myself. Did it work?

A Kindle 3G is Way Better Than Track Shoes – It took a while, but my Kindle 3G and case were delivered yesterday. I’ve been playing around with it and I really like it. I’m definitely going to do more reading with this thing than I did with paperbacks. If anyone is interested, I can do a full video review on the Kindle after I’ve had it a while. Let me know in the comments.

I do like it so far, but I downloaded some free books from Project Gutenberg and they didn’t really come through very well. One repeated some disclaimer about ten times and I got frustrated and deleted them all. I need more time with it, but it looks like actually buying books is gonna be the best route.

Do I Have Too Many Credit Cards – I decided to just close my Kohl’s and Express cards. Both of these have been around for only a short while, so closing them will give me an increase on my “Average Account Age” score on my credit report.

Speaking of credit reports and scores, I found Credit Karma, a FREE site that tells you your credit score. It’s seriously free (reminds me a lot of Mint.com, where they are spitting advertising on you all over the place) and you can get your score and track it over time. It was highly recommended by another blogger, and I’ve been happy with it since I signed up a few days ago.

As far as I can tell, that’s the update on some of the things I have posted about earlier. If there’s something else I posted about that I’m missing and you’d like an update, just let me know. There are also some things to get excited about in the future. I’m working on more music videos and a entering a new video contest that I’ll tell you more about when I have my submission ready. Videos = FUN!