Being Wealthy Is Not Ungodly

It’s hard for me to go a full day without hearing someone lambasting rich people. Barack Obama, in an attempt to shore up support from the liberal base for the election next year, has revitalized his “tax the rich” rhetoric. He says rich people need to pay their fair share, despite the fact that the top 5% of earners in America pay almost 60% of the federal income taxes already.

I can understand Obama criticizing rich people because for not paying 100% of the federal taxes. I was, however, surprised to hear on twitter last night that God feels the same way.

Only in America: the political party that represents the wealthiest Americans also claims to follow Jesus’ gospels. $$ does strange things.

Wow. Apparently God hates wealthy people. He doesn’t care if you provide jobs to hundreds of people, create some valuable product or service that people want or need, donate money to your church and other charities, volunteer your time, or any other positive thing a wealthy person might do with his or her money.

Nope, Matt thinks God wants you to stop doing all those things and just be poor. (Actually, through further discussions I found out Matt is an atheist, so he doesn’t think God even exists to be able to want anything.) 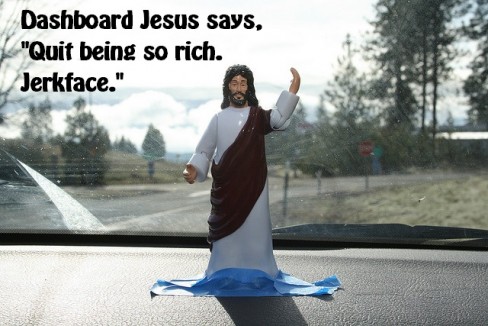 Matt’s point, as he explained it to me, is that he finds it hypocritical for someone to believe in the Bible and to be wealthy at the same time. Interesting idea. I wonder if he would like to see all Christians decide to give away their wealth, do the “Godly” thing and become poor.

Great idea Matt! Let’s take 78.4% of the population of America (that’s the number of Christians in America according to this website) and throw them into poverty! Who needs all those evil, profit hungry, wealth grabbing companies run by Christians that provide all the goods and services that make America a prosperous nation when we can have 4/5ths of our population beneath the poverty line? PRAISE THE LORD!

And let’s take the “America glasses” off for a minute. How about all 2 billion Christians in the world stop building wealth and start building cardboard box houses under bridges? Can you imagine how wonderful and holy the world would be then?

Are you seeing the absurdity here?

While I am a proud Catholic, I would never preach to you guys. If you want preaching, there are some great Bible-based personal finance sites like KNS Financial and Bible Money Matters. However, for argument’s sake I want to point to a verse in the Bible about wealth that I believe illustrates a reasonable religious approach to money.

Instruct those who are rich in this present world not to be conceited or to fix their hope on the uncertainty of riches, but on God, who richly supplies us with all things to enjoy. Instruct them to do good, to be rich in good works, to be generous and ready to share, storing up for themselves the treasure of a good foundation for the future, so that they may take hold of that which is life indeed. – 1 Timothy 6:17-19

I’m no biblical scholar so I won’t attempt to interpret that passage. I’ll let you decide whether the God described in this passage would approve of a person who not only has money but also lives a “good” life.