I have been getting assaulted by readers over at Sweating the Big Stuff for my opinion on coupon sharing so I’m hoping I have a safe haven here with my beautiful Thousandaires. Let me set the stage:

Daniel wrote a post “Using Personal Finance to Make Friends” where he tells a mystical tale of bestowing financial savings upon a damsel in distress. Translation: He used a 30% off coupon at Gap, then turned around and handed said coupon to another woman in the store who was about to pay full price for her items. 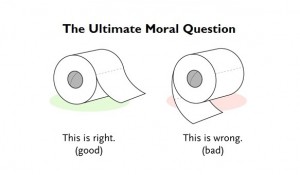 Coupon sharing is as blatantly wrong as under-rolling.

Not only did Daniel give the coupon away, but he purposely found the person with the most items, thus ensuring he was saving that person a large sum of money. While most of his readers praised him for his generosity, I scolded him for his immoral behavior. Some people thought I was joking, but I truly wasn’t. Here goes nothing.

Daniel estimated she had about $100 in merchandise. If we take Daniel out of the equation, as if he or the coupon were never there, that woman would have paid $100 for her selections. She entered the store on her own free will and chose her items, intending to pay full price.

Then Daniel comes along and gives her the 30% off coupon, and now she pays $70 for the same merchandise she was willing to pay $100 for. Daniel is directly responsible for Gap losing $30 in revenue, and for the woman having an extra $30 in her pocket.

Would you consider it a “good deed” if he had taken $30 out of the register and handed it to the nice woman with a handful of clothes? I call that stealing. The results of what Daniel did are no different. In giving away the coupon Daniel’s actions were legal, but I don’t consider them morally justified.

What if I was angry with Gap for some reason and wanted to see their profits suffer? I could pose as a customer, print off hundreds of coupons, and go hand them customers who are about to check out and pay full price. It would reduce their profits by hundreds or thousands of dollars and it wouldn’t increase sales by a single penny.

It is clear this action would be morally reprehensible. It is also the exact same action Daniel took, with two minor differences; the scale of his actions was smaller and his intent was to help the customer, not hurt the company.

Scale doesn’t change morality: Murdering one person is bad. Murdering 100 people is worse, but both are still wrong.

Intent doesn’t change morality: Here is a famous quote. “I believe today that my conduct is in accordance with the will of the Almighty Creator.” -Adolf Hitler

I’m not saying coupon sharing is as bad as murder, and I’m not comparing Daniel to Hitler; I’m proving a point. I also want to make sure it’s clear I don’t think Daniel’s actions were illegal; I just think they were immoral. I also think Gap made a bad decision in issuing a coupon in such a manner that this situation exists, but creating a scenario that makes immoral behavior easy doesn’t make that immoral behavior any more acceptable.

If it were me, I would have taken that coupon somewhere else in the mall (like the playground where dad sits with the kids while mom shops) and dropped it. That way, someone could pick it up and the coupon could serve its intended purpose; to give someone a reason to shop at Gap who wouldn’t normally go.

Today’s Thousandaire Question: It’s hard not to have an opinion on this. Was Daniel morally justified in his coupon sharing, or did he effectively steal from Gap and give it to the woman in the store?

P.S. Daniel, thanks for sharing your story and providing the foundation of this interesting philosophical topic.