My Budget Helps Me Buy Awesome

I’m sitting at Starbucks with my good friend Jimmy because we are having a blog party. Jimmy’s brain is always firing at 1,000 miles a minute and he periodically blogs at (Pick) My Brain about whatever thought stays in his head long enough for the words to flow out of his fingers.

Jimmy has recently embarked upon a quest to spend only $100 over a seven-day-span. He actually started his journey weeks ago, and has failed twice. The first week he failed miserably. The second, he missed by a few dollars. He’s in the middle of a third week and I’m rooting for him.

As soon as he accomplishes his feat, he will be guest posting here about his experiences; why he failed his first few tries and how he fixed it (if he ever does win).

While I think it’s great he’s playing a game to control his spending, I don’t think I could ever do it. You know why? 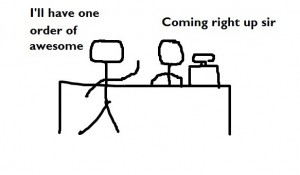 Because I play the BUDGET GAME every day of my life. I track my spending monthly, I know withing a few hundred dollars how much money is in the bank. I know where I’ve spent money, and where my budget says I can spend more.

I summed this up pretty succiently on Budgets Are Sexy in a response to his post Spent $100 in 20 Minutes Yesterday.

The point of a budget is not to stop yourself from spending money; it’s to make sure the money you spend is worth it.

I can’t waste money on crap because there’s no room for crap in the budget. That means I only spend money on AWESOME. Okay, sometimes I mess up and make a bad purchase, but you get my point.

Today’s Thousandaire Question: Why do you (or don’t you) have a budget?