Give People the Opportunity to Be Generous

I’m closing on my house in the beginning of December and there’s a lot of work to be done and a lot of money to be spent.

I already wrote about how I found a great deal on floors, but even a great deal is going to cost me thousands of dollars. That’s not to mention the fact that I still need to pay the $40k down payment.

Did I mention I’m taking donations?

I’ve actually told a lot of people about the house Tag and I are buying. I’ve also told just as many people about our upcoming wedding. I mention this to these people because I’m freaking excited and honestly I’ll tell a complete stranger if he’ll listen.

But I also tell people about this stuff because eventually I just might get lucky.

When I moved out of my last apartment I had a bunch of furniture I wanted to get rid of. I put it on craigslist and sold some stuff but ended up with a lot left over. At the end of the day a guy came to buy my bed. Turns out he was a broke college student.

I could have tried to sell the rest of my stuff, but this kid definitely needed everything he could get and at least he was willing to haul it away. He didn’t ask me to give him extra stuff. He just told me his situation and I was happy to help.

He paid for a bed. He got a bed, a dresser, a TV console, a desk, and probably more stuff I’m forgetting about.

When I tell people about all the exciting (and expensive) stuff I have coming up in my life, I’m not just letting them know about my super awesome future life. I’m also opening the door for them to help if they are able.

This may not work all the time, but it sure paid off today.

I Got a Free Washer and Dryer

The other day I called my realtor and asked if he could get me into the house so I could get measurements for the new flooring. We met at the house and he helped me take measurements. As I was talking about how expensive it will be for us to get the new floors plus buy a new refrigerator, washer, and dryer, he stepped in. 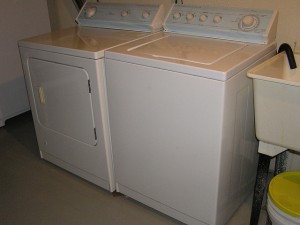 He and his wife are getting a new washer and dryer set soon, and he offered me his old set free of charge!

And you can bet your sweet behind that I accepted!

I would never ask someone for help because I know I don’t NEED it. However, if someone is willing to help then I’m not going to let my pride get in the way of accepting their generosity!

What Goes Around Comes Around

I gave some poor college kid a bunch of furniture and now that I’m a poor new homeowner I’m getting a free washer and dryer. Plus, who knows what other free stuff I might luck into by telling my new house/wedding story even more.

In my life I’ve found that generosity pays itself forward. If you take advantage of opportunities to help others then you’d be surprised what kind of help you might get in return one day.

Readers: Do you have a story where you gave someone something they needed? And, have you ever been lucky enough to have someone else offer you just what you needed at the perfect time?