High School Kids Should Have Jobs

When I have the pleasure of talking to young people (in high school or college) about money, many of them have never earned a dollar in their lives.

Some parents don’t allow their kids to work during school. These parents say they want their kids to focus on their schoolwork and extracurricular activities (if they have them). I would never tell those parents what to do, but I would tell them that they are stupid if they think a kid can’t have a part time job AND excel in the classroom and on the field. It’s never too early to start earning.

What makes a parent think sheltering a kid from the real world is the best way to prepare him for being in it one day?

When I Was a Kid

By the time I graduated high school in 2003, I had the 9th highest GPA out of over 400 students and scored in the 98th percentile on my ACT. In addition to the good grades, I had a full extracurricular activity schedule. I went to the weight room before school every day to get stronger so I could excel in sports. I was on the swimming, football, volleyball and track teams. I was pretty good too; good enough to be an All-State swimmer at least. I also did newspaper, choir, National Honor Society, and other clubs I’ve since forgotten.

The point I’m making is that I did just about anything and everything any high school kid could want to experience at school.

Oh, and did I mention that I also earned over $14,000 from part time jobs during that same time? According my old income taxes, between 2000 and 2002 I earned $14,241, and that doesn’t even count anything I made in Jan-May of 2003 before I graduated or any side jobs like babysitting or manual labor that wasn’t taxed.

Considering the fact that most of my jobs paid about $7.00 an hour, I must have worked over 2,000 hours while in high school. Some of that was in the summer, but a lot was during the school year when I was an accomplished student-athlete.

Now that I’ve proven it can be done, it’s more important to understand why working in high school was so important for me. Simply put, I was pretty horrible with money when I was in high school. 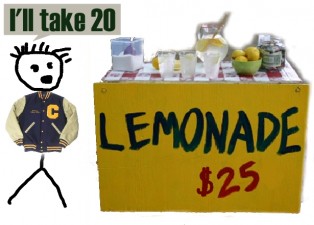 I bought a stupid car and poured way too much money into it. I spent money on food and worthless crap. Despite making good part-time money and living rent-free with my parents, I was still living gas tank to gas tank.

Do you want to know why I’m not in debt today? Because I made my mistakes and suffered financial consequences in high school. What I didn’t learn in high school, I learned in college. By the time I got my bachelors degree, I already had eight years of financial mistakes under my belt.

I knew the value of a dollar, and I knew what would happen if I was irresponsible with my money. I didn’t have to “flip a switch” from kid to adult when I graduated from college; I had been testing the adult waters since I was 15.

Do you know what high school guys do in the summer when they don’t have a job? They play videos games and fart. If they get a job, they’ll work, play video games, and fart. Having your kid get a job doesn’t deprive him of anything. (Sorry, but I have no idea what girls do)

People are going to make financial mistakes. Your kids (yes, I’m talking to you) are going to make financial mistakes. You can’t avoid it. If you don’t allow your kid to get a job so he can make and learn from those mistakes early in life, then you’re just pushing those mistakes further and further into the future where they have a much more crippling impact.

You’re not “robbing kids of their childhood” by encouraging them to get a job; you’re giving them the opportunity to learn responsibility and make small mistakes, so they have a better chance of avoiding the big mistakes later on in life when it truly matters. Stop doing what’s easiest for your kid, and start doing what’s best for him.