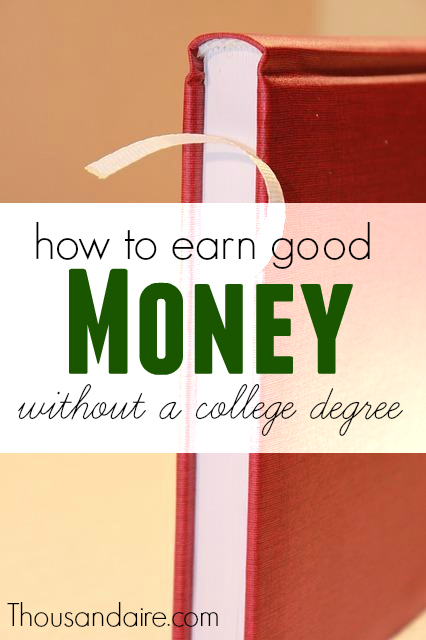 Here’s another article saying that if you don’t go to college you are missing out on $830,000 of income. Holy crap! With information like that, I better start saving now to send my future kids to super expensive colleges!

As you know, I’m not a fan of the “send everyone to college” mentality that has prevailed over the last few decades in America. There aren’t enough jobs for college graduates and we are setting our young people up for financial failure.

I’m not the only one that holds this opinion either. The president of South Korea noticed that his country has too many over-educated and underemployed young people. While Barack Obama’s response to that situation is to tell more kids to take out federal loans for a degree, Lee Myung Bak says skip college and go to work.

Even former NYC mayor Michael Bloomberg (someone I rarely agree with on anything) says that your average kid is better off becoming a plumber than going to Harvard.

We also have some pretty interesting data about small business owners.

A college degree can’t do anything but sit there and look pretty on a wall.

The key to earning a lot of money is not necessarily to go to college. The key is learning skills that make you valuable.

The first step to making money is the same whether you go to college or not: learn something. You can learn in a classroom, or you can learn while you’re making minimum wage or even doing an unpaid internship. No matter what setting you choose, make sure you are learning as much as possible.

If you get a minimum wage job and just do enough to scrape by, you’ll always be earning minimum wage. The key is to master whatever you’re doing. Work hard. Learn how to do other people’s jobs around you. Study your industry when you aren’t at work. Hopefully as you are learning you are also getting promotions and/or raises. The more you learn, the better.

Eventually you’ll know enough and have enough skills to become an extremely valuable worker. You will know enough that you can run the whole dang place yourself. Then you have two decisions; either do your job for someone else and get paid a salary (become a manager) or start your own business (become a small business owner).

Let’s take fast food as an example. If you have an In-N-Out Burger in your hometown, you can probably get a job there for $10 an hour or more. You can learn to make burgers, run the fryers, make milkshakes, run the cash register, run the drive through, and more. Eventually, you may have an opportunity to become a manager.

So you can work your tail off as a manager for a few years, have enough money to buy some nice things and put a sizable amount into savings. A few more years down the line you might be ready to open your own In-N-Out Burger. Or you might take what you learned there and open your own restaurant. “Kevin’s House of Food” is a good name… I’m just saying.

How much does a restaurant owner make? Beats me, but you can bet it’s probably more than $100k a year they are paying the managers.

Flipping burgers is just one example. You can do the same with plumbing, carpentry, lawn mowing, or any other small business you can think of. None of these require a college degree, but they all require skills.

Another way to get rich is to get a college degree. Learn skills at a university, then go to work. Maybe you go back for a Master’s degree and command a 6-figure salary. Maybe you start your own company.

Get yourself some skills and the money will follow.