Why You Shouldn’t Go to College

Why You Shouldn’t Go to College 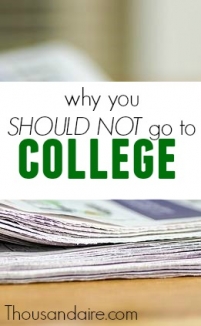 President Barack Obama has been in the news recently as he invited more than 100 college presidents to DC in an attempt to expand college access, especially to low income students.

“More than ever a college degree is the surest path to a stable middle class life,” Obama stated.

Second, putting more kids in college doesn’t make sense. Either he’s not reading the numbers provided by the Bureau of Labor Statistics, or he’s just flat out ignoring them.

Using data from the US Bureau of Labor Statistics, here is a table showing projected job growth between 2010 and 2020 by education level. 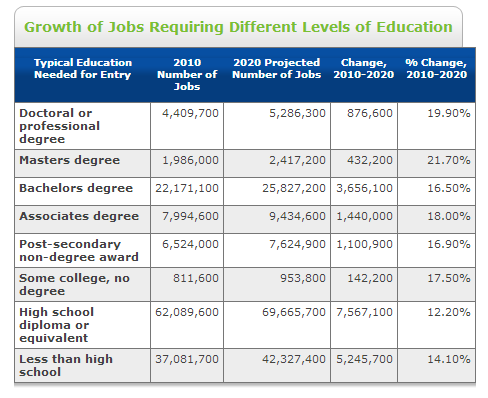 If you include the Associate’s Degree and the “some college” jobs (which are really weird to me. It’s hard to imagine an employer who is not willing to hire a high school graduate, but is willing to hire a college dropout), then you’re up to 7,648,000 jobs, or 37.4%. Still not very high.

In 2012, 2.1 million high school graduates enrolled in college. Again, this is all data provided by our benevolent government. So if we have 2.1 million kids starting college each year from 2010 to 2020, we are going to have 21 million people ranging anywhere from college dropout to PhD, and only 7,648,000 new jobs. Not good.

Also keep in mind that 2.1 million per year is only high school graduates. There’s actually going to be quite a bit more college educated people when you include the non-traditional students.

So we are expecting under 8 million new jobs for college educated people, and a low estimate of 20 million newly minted college graduates and attendees. It looks like we are set up to have a preponderance of over-educated individuals.

Except we have that already. How many more reports do we need telling us that Twice as Many College Grads in Minimum Wage Jobs as 5 Years Ago, 53% of Recent College Grads are Jobless or Underemployed, and the Job Picture Looks Bleak for 2013 College Grads.

If we think back to that table of jobs by education level in 2020, we expect 12,782,800 new jobs in the next 10 years for people with a high school diploma or less education. That number jumps to 14,025,900 jobs when you include those who attended college but never receive an Associate’s Degree or higher.

Why borrow tens of thousands of dollars if you will just end up graduating from school and getting a job that doesn’t require a degree?

Even when you account for all the baby boomers retiring (although many aren’t in a financial position to retire even if they want to), there just aren’t enough jobs for all the currently unemployed college grads and all the new ones we’ll be churning out in the future.

But why would anybody want to do that?

Have you been on a college campus recently? If so, you’ve probably seen a construction site. It doesn’t matter which college you go to; pretty much all of them are getting brand spankin’ new buildings. Why? Because enrollment keeps going up. People still believe you need a degree to get a good job, which is not surprising when people like the president are screaming it from the mountaintops.

If people start paying attention to the numbers and look at all the unemployed college grads, they might decide to skip college. If enough people do that, colleges start losing money. That means no more new construction. That means college professors getting laid off. That means bad news for the education business.

And then there’s student loans.

Why would the government want people taking out student loans, even if there’s a good chance they are going to default on those loans? Because even in default, student loans are insanely profitable for the US Government.

The government loans the money, they make money on the interest.

They also act as the collections agency, so loans in default are charged fees that make even more profit for the government.

Finally, the government created the laws that make student loans immune from bankruptcy, so they will literally take your tax return, garnish your wages, or even take it out of your social security check until they get their money.

The only way to get out of student loan debt is to pay them off, or die. (see the infograph at below)

College is for Some People; Not for Everyone

With that being said, college is EXACTLY the right choice for some people. We need college educated individuals to become the next generation of doctors, lawyers, engineers, nurses, teachers, and more.

If you are a young person and you decide to go to college, do it because you have enough money and/or scholarships to avoid student loans, or if you know what you want to be and that job requires a degree. Don’t do it because Barack Obama, your parents, or anyone else tells you that “you should”.

If “you should” is your main reason for going to college, then actually you shouldn’t.