I Saved a Dog!

Last night my girlfriend Tag and I went to get frozen yogurt. I love froyo but was somewhat disappointed last night because they didn’t have Fruity Pebbles. Seriously, a froyo without Fruity Pebbles is like Lady Gaga without a lobster on her face.

Anyway, as we were leaving the froyo shop, Tag spotted a dog running alongside a pretty busy road. “Awww, he looks lost! We should go back and help him!” Tag cried. Chasing down a random dog wasn’t really in my plans for last evening, but I couldn’t just leave a black lab running around on a busy street to get run over.

I turned around to try to find him and literally almost ran him over as he decided to cross the busy street. I made a quick U-turn and followed him into a neighborhood.

After a few minutes of chasing him down, Tag ended up catching him. Now the real question: what do you do with him?

He had a collar, but there was no number for the owner. It just had a phone number for the vet where he had his rabies shot. I called and they were obviously closed at 9:30pm, so I had two options: either let the dog keep wandering the streets and hope he found his family before getting smashed underneath a moving vehicle, or take him home to my apartment.

And before I tell you my decision, let me tell you a little more about the dog. It was a pretty normal sized black lab. He was definitely a boy, and definitely was not neutered. I’ve never seen such huge balls on a dog. And he stunk. Holy crap did he smell. It’s like he took a crap, and then peed it in, and then barfed in it, and then rolled around in it for a few hours.

He was also a sweet little guy. He definitely wasn’t trained very well (he didn’t even seem to know “sit”), but it was pretty easy to see that he would never harm a fly. Just a sweet, dumb little guy.

So, into the back seat of my car he went.

I took him home. We nicknamed him Demetrius, because you can’t have a dog without a name.

Not being a dog owner, I had to improvise. When we needed to take him outside, I didn’t have a leash so I used the strap from my gym bag. I didn’t have a dog bowl to give him water so I filled up my favorite hamburger helper stove-top pan. I don’t have dog food so I let him eat some Multi Grain Cheerios out of the palm of my hand.

Overall, I think Demetrius had a good night. Much better than he would have had on the streets, that’s for sure.

In the morning, Tag took me to the airport (because I’m headed to Chicago for the Financial Blogger Conference!) with Demetrius in the backseat. After she dropped me off, she took Demetrius to the animal hospital where he got his rabies shot and they said they would contact the owners.

And that’s it. We never even found out Demetrius’ real name. He has probably been reunited with his family. I’m just imagining some little boy who was up all night crying, thinking he would never see his best friend again, only to get the best phone call of his young life this morning, all thanks to me and Tag.

So next time you see a dog that looks lost, you might want to help him find his family. Even though my apartment now smells like urinevomitfeces and I hardly slept at all wondering what kind of damage this strange dog might be doing to my apartment, it was worth it! 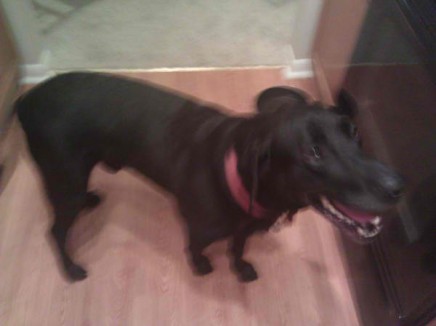 He wouldn't stay still, so this is the best picture I could get