What’s the Best Job You’ve Ever Had?

I have one very simple question, and I hope each one of you decides to answer it in the comments. The question:

What is the best job you’ve ever had?

I want to know, out of all the individual things you’ve ever been paid to do, which is the best? Think long and hard on this one, and I’m pretty sure you can come up with something awesome. There are only two rules: it has to be freaking sweet, and you have to have been paid for it.

If you aren’t quite sure what I’m asking, read the best job I’ve ever had and I think you’ll get a pretty good idea.

When I was in college, I made money as a professional fantasy football journalist. The company I worked for runs different fantasy football games, including one where they have a live draft event. Hundreds of people show up to participate in this event, with a grand prize of $10,000. The event itself is a lot of fun because the people I work with are great, football is awesome, and the girls are beautiful.

Yes, the girls are gorgeous. Allow me to explain.

This event is a collection of about 250-300 football fans (mostly men) who sit in a big conference room for 2-3 hours yelling out men’s names. I don’t know about you, but that sounds pretty un-masculine to me. It was pretty clear that we needed to do something to make it more manly.

When a participant in our event calls out the name of an NFL player they want on their team, someone has to put a sticker of that player’s name on a big draft board. Who better to do that than highly paid, beautiful, professional models?

The company I worked for paid a bunch models to be our Draft Girls every year, and the guys loved it.

Well, I’ll say they loved most of the draft girls. As it turns out, even some professional “models” aren’t really that beautiful. That’s where I come in.

The Best Job I’ve Ever Had was Rating the “Talent”

Most of our Draft Girls were gorgeous. Heck, they better be with how much we were paying them (I don’t know how much exactly but it was something like $100 an hour per girl). However, let’s just say there were a few Draft Girls whose “talent” didn’t live up to their price tag.

I’ve done a lot of different things working this event over the years, but no job has been more fun than rating the Draft Girls.

My assignment was to rate each of the Draft Girls on the standard 1-10 scale. Appearance was the main factor, but personality was also important considering the girls would be spending 2-3 hours interacting with the customers. I had to spend a minute or two with each Draft Girl to do a proper evaluation. Then I recorded my rating and moved onto the next one until all were complete.

The company used these ratings to request certain models be used in future years.

While some of you may think this is ridiculous or stupid or chauvinistic, it really was a necessary job. Here are a few reasons this was important:

It was a tough job, but someone had to do it. I charge $20 an hour for the work I do at this event and probably only did this for 1/2 hour. I really only made $10 to rate the talent.

What’s the Best Job You’ve Ever Been Paid For?

Now I ask again, because I’m sure most of you have been paid to do some awesome stuff. What is the Best Job You’ve Ever Had?

I know a lot of us can hate our jobs sometimes, so take a minute to think about the best thing that’s ever made you money, and share it with everyone in the comments.

Or if you’d like, you can just rate the Draft Girls like I did. But I’m not paying you. 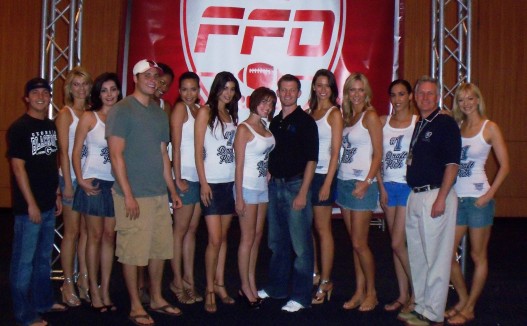