I Was Almost on the Anderson Cooper Show

I was so freaking close to getting one of my music videos on national television, along with a one-on-one interview for both me and Tag. Get ready for a story people…

On Sunday, Tag and I were cleaning my apartment when I checked my phone and saw this tweet.

If you don’t want to click the link, it says:

@kevin_is_money I am a producer with a national syndicated show in NYC. I wanted to speak to you ASAP about a show we are doing for 1/10.

When I saw it, I was immediately struck by a combination of skepticism and optimism. This could be fake, or it might be real. I checked my email next, and sure enough there was an email waiting for me from Kristen. She said she is producer for the Anderson Cooper Daytime TV Show and wanted me to call her immediately about a media appearance for an upcoming show.

The details of the show are supposed to stay secret until it airs, but it has to do with one of my music videos.

This could really be happening.

I Call Kristen, the Producer

Tag asked me (aka told me) to help her clean something. I said, “Hold on, I need to call a producer from the Anderson Cooper show about my music videos.” She thought I was just making it up to get out of cleaning. Seriously?! Am I the kind of guy who would do that!?!? (hint: yes)

I call the number and Kristen answers. She says she saw my video and loved it. We only talk for a few minutes because she’s on another call but she’s super sweet and complimentary. She says she’ll call me back in 5-10 minutes but she needs to know really quick: “Are you available to fly out to NYC tomorrow night for a Tuesday morning show?”

My response: “Um, sure! I can make that happen.”

This is really happening…

5-10 minutes later she hasn’t called back.

I was pretty sure she wouldn’t go from “can you come to NYC” to ignoring me, but I was anxious because I knew it was a short timeframe and I also wanted to finish the call before I left for church choir later that afternoon. 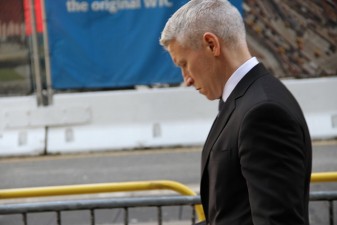 Kristen becomes very interested in having both of us on the show together, and tells Tag that if she’s willing to come on the show as well, they would fly both of us to New York City. They’d have a driver pick us up at the airport, put us up in a nice hotel, and of course we’d go on the show to talk about prenups. Tag doesn’t love the idea of being on national television, but after a few minutes of thinking about it she agrees.

Kristen just needs to run it by her boss and get approval, and then she’ll call us back to work out logistics.

When Does My Flight Leave?

At this point I had to go rehearse for my church choir. I was just hoping Kristen would call back before church started so I could take the call and work out travel arrangements. With about 20 minutes left before church starts, I get a phone call.

I leave rehearsal to take the call and start talking to Kristin again, but I can immediately tell by the sound of her voice that the news isn’t what I was expecting.

Kristen says that she talked to her boss and it’s gonna be hard to fit a last minute flight into the budget. She says she’ll work on getting approval in the morning, but we may end up just doing a Skype interview instead. She’s still very sweet and nice about everything.

I tell her that either one is fine (although in my head I’m really hoping for the NYC trip) and thanked her for getting back to me. She said she’d call me tomorrow morning to let me know. Kristin didn’t even mention the possibility of dropping my story entirely, but I had a feeling…

I wake up the next morning and start working my full time job, all the while watching my cell phone. Morning in New York ends at 11am CT, so I figure I’ll get a call before then. Of course I’m impatient so I call Kristen at 10am CT. She answers and says she still needs to talk to her boss and that she’ll call back.

At this point I know the show will literally begin filming in less than 24 hours. I don’t know exactly how daytime TV shows work, but I have a feeling they need the guest list set at least 24 hours in advance. They could make an exception for Matt Damon on short notice, but I have my doubts that they are going to stop the presses to add Kevin McKee to the show.

My suspicions are confirmed when I get the final call from Kristen. The show is already completely full of guests and it looks like there isn’t any room for Tag and I on this episode. As always, she’s very nice and seems truly sorry that it didn’t work out. She said that she really enjoyed speaking with the two of us and will keep us in mind for any future shows.

OK, this definitely isn’t happening. At least not this time.

I Will Be on TV Someday Soon

I’m not mad at Kristen or anyone at the Anderson Cooper show. They have to make a great show and do it on a budget, and if Tag and I didn’t fit in that equation this time then I understand.

I’m a little disappointed, sure, but definitely not mad. One day I will be on TV talking about my videos and how I can deliver the personal finance message differently from anyone else in the world.

A Little Help From My Friends?

In the meantime, maybe you guys can help me out a little bit. Kristen seemed very nice and I believe if it were up to her that we would be on the show. Maybe I just need broader support at the Anderson Cooper show in general.

Imagine if everyone reading this post sent a tweet to @Anderson saying something like “@Anderson I heard @kevin_is_money might be on the show. I’d DEFINITELY watch that episode!” or “@Anderson you have to talk to @kevin_is_money about his financial music videos” or something like that. Please nothing negative, but a bunch of positive tweets from you guys might be the nudge they need to put me on there.

And no matter if I go on that show or not, I always have this website and I have all of you who read every day, so thank you!