If Warren Buffet Likes Railroads, Then I Do Too

Unless you’ve been living under a rock the past year (not sure how you are reading a blog from underneath a rock), you’ve certainly heard about Warren Buffett’s purchase of Burlington Northern Santa Fe Railroad (BNSF). I’ve always been interested in the rail industry because it is inherently more efficient that trucking, however, after Mr. Buffett’s purchase, I felt I had been robbed from my opportunity to buy into this industry…but there are some options.

Overview of the Industry:

The majority of the US freight rail market is controlled by 4 major railroads (Class I Railroads), BNSF, CSX, Norfolk Southern (NSC), and Union Pacific (UNP).  Over the next few years I think these railroads will create a lot of value as there are a number of macroeconomic trends playing into this industry.

Barriers to Entry: Railroads have an incredibly high start-up cost, as the companies have to build the track and purchase the cars and locomotives. This high start-up cost provides protection from competition.
Competitive Costs: The transportation costs of railroads are significantly lower than regular trucking. Trains are more fuel efficient and you only need to pay one guy to drive 100 trucks.
Increased global trade: Most experts will agree that in the future we will see a continued focus on global trade, especially with Emerging Markets. Increased trade will have to be transported by ship, truck, or rail.
Increasing fuel prices: As mentioned above, the amount of fuel required to move a product from point A to point B is much lower for a railroad compared to trucks. As oil prices rise, railroads will become a more attractive freight option.
Shifting US population: Through the last few censuses, we have seen a great migration within the United States, from the historic population centers in the Northeast and Midwest, to the South and West. This will lead to increased shipping between the history and future population centers benefiting railroads that operate in the south and west.

There are several reasons I have chosen UNP over CSX of NSC. 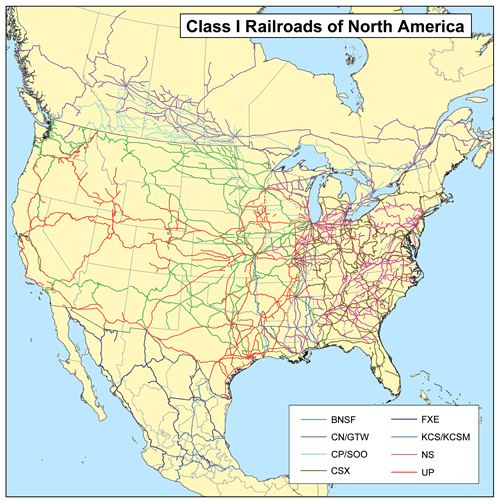 When Warren Buffett purchased BNSF, the deal valued the company at approx. $44B and obviously Mr. Buffett thought this was a good price. UNP is currently trading at a market cap of around $46B, so how different are these two companies?  Here are a few key statistics:

Looking at the chart above, I can’t tell the difference between the two companies. If Warren Buffett is willing to pay $44B for BNSF, then I am certainly willing to pay $46B for what seems to be inherently the same company.

I don’t have a position in UNP and do not plan on purchasing any in the next 60 days.

The thing that worries me about this company is the reason The Hoff likes it so much; why didn’t Warren Buffett want UNP? I am 100% confident he knows better than I do, and he decided to buy BNSF instead of UNP, despite their striking similarities. That worries me, so until I found out why, I wouldn’t be jumping into a position in UNP.


Important to note that ALL ideas, thoughts, and/or forecasts expressed or implied herein are for informational and entertainment purposes only and should NOT be construed as a recommendation to invest, trade, or speculate in the markets.