If You’re Going to Occupy Something, At Least Pick the Right Place

I’ll let one of the protesters try to explain it to you in her own words from this lohud.com article:

Among her biggest complaints are the millions of unemployed and uninsured and the trillion dollars in student-loan debt.

“I’m a victim of all three,” said Angelo, who hasn’t found regular work since graduating from Pace University two years ago.

I want to thank Nicki Angelo for clearly showing the entire world how utterly stupid this movement is.

First let’s understand what they are occupying: Wall Street. They chose this place because it represents the financial markets of America. It represents the free market and the entrepreneurial spirit of striving for profit and making money.

She is occupying Wall Street because she is unemployed, when in reality Wall Street provides jobs. The whole reason companies go public is to raise capital so they can expand their business and, you guessed it, hire more workers.

If she wants to occupy somewhere because she’s pissed off that she’s unemployed, maybe she should occupy the career center at her college where advisers probably told her it would be a good idea to spend tens of thousands of dollars to major in something like art history.

Yes, companies fire employees for the sake of profit. Why? Because if a company is not profitable, then EVERYONE loses their job. 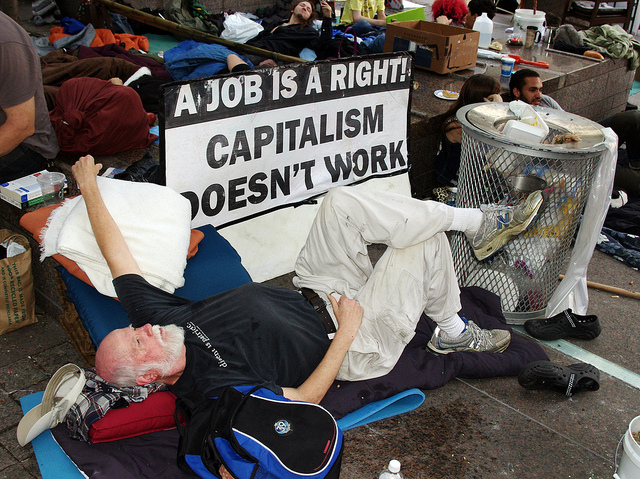 I wish this sign were joking. photo credit: flickr.com/shankbone

The only way Wall Street is going to give her insurance is if she goes back to school, gets a finance degree, shows a high level of aptitude and gets hired as a broker at a Wall Street firm.

Health insurance is readily available to her; all she needs to do is get a job and pay for it.

Wall Street could pay off her student loan debt, again, if she got a job there and used her wages to pay it off. She borrowed and spent a bunch of money, and now she doesn’t want to pay it back.

She’s a “Victim” of all three

I’ve given Nicki some suggestions of were her protests might better serve her causes, but her biggest problem is her “victim” mentality. Excuse me if I don’t break down in tears for all the suffering that has been imposed upon her:

I don’t know Nicki Angelo in person. I only know what I’ve gathered from the information in the article and what’s public on her facebook page. And yet, it is clear to me that if she is being victimized by anyone, it’s herself.

There is absolutely no sense of personal responsibility from Nicki Angelo, and from what I understand, any of the other “protesters”.

They only see what successful people on Wall Street have and NOT all the work they’ve done. Successful brokers on Wall Street have been working 80 hour weeks for decades to make themselves rich while Nicki was playing with her cats. And now she’s pissed that they have more stuff than her.

These protesters don’t want justice; they are just angry that they have run out of people willing to give them money in exchange for nothing.

UPDATE: If you want to see Nicki Angelo’s reaction to this post, you can find her comment here.