As you may know, I was at the Financial Blogger Conference last weekend. I had a lot of fun, met some awesome people, and barely made it out alive after being swarmed by a mob of sexy 20-something babes who were kicking, scratching, and pulling each others hair for the opportunity to meet me in person.

At least that’s how I remember it.

I got to know a bunch of people really well this weekend, and I need to share my experience with you. Every person listed below was freaking awesome and deserves your attention. If you don’t have a bunch of time right now to click though and check out each one of the websites listed below, then you better save this post and come back later. You won’t want to miss out on these people.

Meeting Shannyn from Frugal Beautiful is a great way to start a conference – The first thing I did at the conference was hop in a van and ride to do some community service. Shannyn sat in the bucket seat next to me during the ride over and was lots of fun. Any fear I had of a being surrounded by a bunch of super awkward, nerdy bloggers was squashed after the first few minutes with Shannyn.

J Money from Budgets Are Sexy knows how to get a party started – If you’ve ever hung out with J Money, you surely know that he can get a party started at the club. But that’s not what I’m talking about here. J Money and his Love Drop team started the conference with a volunteer event at Phil’s Friends, an organization that provides hope for cancer patients. One day, you’re probably going to see a crazy mohawked man on TV changing people’s lives.

Andrew from Money Crashers is kicking serious butt – It wasn’t until this weekend that I realized Money Crashers is just a two man operation (not including staff writers). Andrew and Gyutae have built a great site that seems like it takes about 10 people to run. Andrew is a really great guy and I hope to work with him and Money Crashers more in the near future.

Bethy and Justine are two more reasons to love Credit Karma – FINCON was mostly full of independent personal finance bloggers, but there were a few people there on behalf of their companies. My favorite non-independent people, by far, were Bethy and Justine from Credit Karma. I busted out an impromptu performance of the HTPC Rap for Justine, and after her ears stopped bleeding she asked me if I would make an appearance on her and Bethy’s video blog. This is going to happen at some point, so I have just two words: GET EXCITED!

Ashley from Money Talks Coaching is one of those people you gravitate towards – The first time I met Ashley was at the Love Drop. I probably talked to her about a dozen more times before the end of the weekend. She’s such a great listener and a nice person that you can’t help but keep strike up a conversation with her every time you see her. You’re awesome Ashley!

Ninja from Punch Debt in the Face is anonymous for a good reason – Ninja’s site is the second funniest, and second most entertaining pf site on the web (after yours truly of course). He and I have a lot in common on our blogs as well as in real life, except for one thing. He blogs anonymously. He says he does it because he’s afraid some internet stalker is gonna find him, kill him and wear his skin as an overcoat. But that’s just his cover up. I have photo evidence that shows why Ninja blogs anonymously: 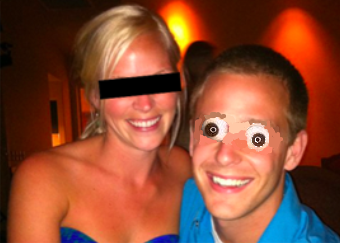 He’s uglier than a love child between Rosie O’Donnell and Christopher Walken! Sorry for outing you bro!

Paula from Afford Anything is a Plutus Award Winner – The Plutus Awards are a lot of fun, but at the same time they aren’t very suspenseful. It’s pretty much understood that the sites with the biggest readership will get the most votes and win awards. However, the Best New Blog category was obviously filled with a bunch of newbies with comparable readerships. I’ve admired Paula’s work for a while and asked you all to vote for her in the Plutus Awards. Even though Paula deserves all the credit for winning the Award, I’m claiming it on behalf of Thousandaire readers. We helped her win that award that she very clearly deserved! Now get excited and be on the lookout for a Paula/Kevin video collaboration sometime in the next few months.

Caleb from Pocket Changed quit his job – Caleb told me the secret to having a really popular post in the personal finance blog world: quit your job. Everyone loves the story of someone who leaves the daily grind to follow their passion. Caleb has one of those stories. I’m rooting for him, and you should too.

Suba from Wealth Informatics writes some really incredible, in depth articles – Suba and I bonded in the bus on the way back from the Saturday night after party. I had basically lost my voice from trying to “network” in a club with unnecessarily loud music (am I an old geezer or what!?) and rode back to the hotel early with Suba. We had a great time making fun of a couple getting uncomfortably intimate in the middle of a restaurant and talking about which video game characters some of the FINCON attendees looked like. Suba is a great person and is one of the best PF writers I’ve read. You should definitely check her out!

Romeo from Romeo Clayton hooked me up! – JD Roth kicked off the conference with a great talk, and during his question and answer session, Romeo stood up and asked JD about how to engage readers in a fun way like me and Ninja do. JD responded by complimenting my videos in front of the entire conference. I hadn’t even met Romeo at that point, but got to meet him later. He’s a really great guy with some strongly worded opinions on his blog. If you like my controversial posts, you’ll probably like Romeo’s site too.

JD Roth from Get Rich Slowly is a bona fide celebrity – Speaking of JD Roth, he was probably the hardest person to talk to at this conference. He won blog of the year in the Plutus Awards, and was the first ever recipient of the Lifetime Achievement Plutus Award. To say he was in high demand is an understatement. I did get about 5 minutes to chat with him 1 on 1 before he was swarmed by adoring fans (seriously) and he’s such an interesting guy. He’s humble, genuine, and learning Spanish much quicker than I was. I’m hoping to have a conversation with him in Español one day.

Phil from PT Money did a heck of a job pulling this thing together – I spoke to Phil a bit on Saturday and asked if he had ever planned an event like this before. He said, “I helped my wife plan our wedding…” This was a huge event, and I don’t want to speak on Phil’s behalf but I imagine it became a lot bigger than he expected. But did it overwhelm him? Just ask anyone who was in attendance. Everyone had a great time, and Phil deserves a lot of the credit. The only way FINCON11 could have been better would have been a live personal finance musical performance! I’m ready when you are Phil!

Jesse from PFFirewall is an incredible guy and an awesome pianist – I met so many great people at this event, but no one was more incredible than Jesse. First of all, he’s as nice a person as you’ll ever meet. He was one of the first people I talked to on Friday and I instantly felt like I had a great friend in him. We had meaningful discussions about what we were doing with our blogs and our lives. He let me hold his little boy Parker, who may have just convinced me that I want kids of my own after all. We busted out some piano in the middle of the hotel, and Jesse is GOOD. He hasn’t been playing long, but geez! Go over to his site Pianoing and encourage him to start playing more! Thank you Jesse for all the great conversation we had, and I’m looking forward to more in the future.