On Sunday October 7th I asked my girlfriend to marry me.

I had been planning to ask her to marry me for a little while and the original plan was already in motion to take her to where we had our first kiss and do it there. Then the plans changed.

This weekend was Tag’s sister’s birthday and we spent almost the whole weekend with her family. Every moment I spent with her was like torture because I wanted to ask her so badly; I didn’t want to wait any longer. I almost made it through the whole weekend when she went home to study while I went to church on Sunday afternoon.

As I was thinking about how badly I wanted to be Tag’s fiance and eventually her husband, I was greeted at church with readings all about marriage. Here was the first reading, Genesis 2:18-24.

The Lord God said, “It is not good for the man to be alone. I will make a helper suitable for him.”

But for Adamno suitable helper was found. So the Lord God caused the man to fall into a deep sleep; and while he was sleeping, he took one of the man’s ribs and then closed up the place with flesh. Then the Lord God made a woman from the ribhe had taken out of the man, and he brought her to the man.

“This is now bone of my bones
and flesh of my flesh;
she shall be called ‘woman,’
for she was taken out of man.”

That is why a man leaves his father and mother and is united to his wife, and they become one flesh.

I felt like the Big Guy Upstairs was just telling me that I shouldn’t wait any longer and I need to ask her tonight!

I stopped at her parents’ house and asked for their blessing (while crying like a big fat baby) after church. And FYI, I’m not a crier.

In the 3 years I’ve been dating Tag I’ve cried three times: one when we broke up for a short time; two was when I found out my mom had cancer; three was talking to her parents. I actually sat in the car for a while trying to practice asking them for their blessing without crying. After about 15 minutes of miserable failure I just decided to go in there and let it all out. Luckily my future mother-in-law and father-in-law gave their blessing.

After that I called my mom and told her I was going to propose, and she of course gave her blessing as well. It was time. I picked up some flowers at the store and headed home.

When I got home I gave Tag the flowers (which she loved) and then she asked me how church was. I said it was really great and that there was a great reading that I wanted to share with her. I went into the closet and grabbed the ring while she stopped her cat from eating her flowers.

We sat down with a Bible and I read her that passage. Then I said, “I feel like God was telling me to do this,” and I got down on my knee and asked her to marry me.

She was stunned and said, “Oh my gosh, are you serious? Are you serious?” I said, “yes” and was getting a little scared that she might say she wasn’t ready.

The she said yes and I became the luckiest man in the world. We spent the rest of the night on the phone telling everyone about what happened and just enjoying the evening together. 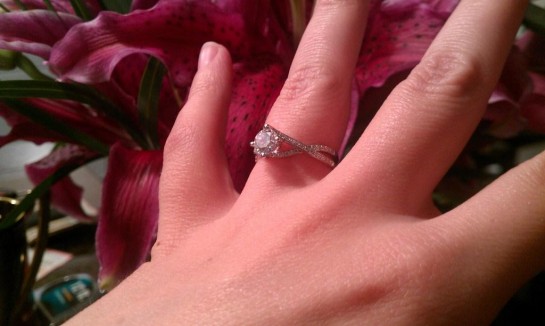 We couldn’t be happier together, and right away we are going to have to figure out marriage stuff. How we are going to pay for a wedding? Are we going to get a house? How do we get in shape so we aren’t big fat slobs on our wedding day? Do we even want a honeymoon, and if so where should we go and how should we pay for it?

Luckily she didn’t want a diamond for her ring so I didn’t have to shop for one on www.diamondqueensland.com.au or any other diamond broker’s website.

As you might imagine, this blog is going to start covering a lot of these topics in the near future. I hope you are looking forward to it as much as I am!

And one more thing: Tag is an acronym for ThousandAire Girlfriend. Now that she’s my fiancee and I don’t want to call her TAF I need a new nickname for her. Suggestions are welcome.