A few weeks ago I got into a fiery exchange on twitter with my friend TeacHer about teacher pay. She thinks teachers should be paid more, while I think overall teacher pay should remain flat or even go down. You can read TeacHer’s opinion at her website if you’d like.

She’s a teacher and I’m not, so it may seem that she’s more qualified to speak to the topic. However, I’m an economics nerd and math/engineering major, so I’m going to approach this from a numbers perspective.

When you have an emotionally hyper-charged topic such as this one very few people look at numbers, data, and facts to explain their opinion. For example, my debate opponent today refers to teachers as “people who do society’s most important work”.

That’s certainly a debatable opinion. Are teachers more important than police officers who keep us safe, farmers who provide us with food, trash men who make sure we don’t wallow in our own filth, engineers who make sure buildings and bridges don’t collapse, truck drivers who make sure all the stuff we want and need can get from a factory to the shelves of a store, business owners who own the factories that make the goods or the stores where we buy all the things we want or need, or any other number of jobs?

The fact is these are all important jobs. If they weren’t important then they wouldn’t exist. Yes, teaching is an admirable and important profession, but to say it’s “society’s most important work” is not only a debatable opinion, but one that distracts from the financial reality of the situation.

First I want to mention that we both agree GOOD teachers need to be paid more. Where we disagree is the idea that teachers overall are currently underpaid (she agrees, I don’t), and that evaluating teachers to determine who deserves more and less compensation is too difficult (she agrees, I don’t).

There’s a general feeling in America that “if you throw more money at it then it will get better”. It’s a very lazy idea and ignores the fact that spending the same amount of money more effectively can be better than spending a lot of money wastefully. Paying teachers more money has not resulted in higher achievement over the last few decades.

The following graph originally posted at Heritage.org consisting of data from the US Department of Education, the National Center for Education Statistics, and the National Assessment of Educational Progress, shows that per-pupil spending has risen from $4,060 in 1970 to $9,266 in 2005 while reading scores have remained essentially unchanged.

Moving further along these lines, a study from George Mason University shows that US Education per-pupil K-12 spending is more than any country in the world except Switzerland.

Since we spend the second most in the world, we should have the second best performing children, right? Wrong. According to USA Today:

Middle of the pack. Mediocre. That’s what all of our education spending is getting us.

Teachers Should Be Evaluated Like Employees in Any Other Industry

We don’t need to increase teacher pay overall. That’s just going to give the crappy teachers even more incentive to keep teaching. Instead we need to stop paying teachers based on years of experience and start paying them based on how well they actually teach.

I agree that every classroom and student is different. That’s why test scores should have little or no impact on a teacher’s performance rating. You identify the good teachers just like you identify the top employees in any company; you watch them work and you talk to their clients (in this case, students and their parents).

I work in the corporate world. My old boss (thanks to my promotion!) lives 1,000 miles away and the last time I saw him in person was 2011. In addition managing me and 5 other people, he has about a million other things that he does on a daily basis.  We have 1 on 1 discussions maybe 1-2 hours per week. And I have a really great, attentive boss; other I know have even less interaction with their manager. 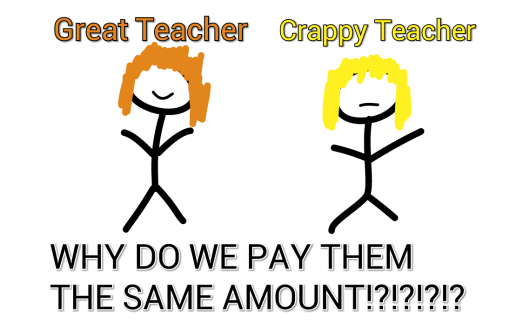 If my boss can evaluate my performance based on that amount of interaction then surely a principal, who is in the same building as his teachers every day and has constant interaction with the teacher’s clients (the students and parents), can evaluate teachers.

Principals should observe teachers, and should do it frequently. And if they don’t have time to do it themselves then they should hire someone devoted to teacher evaluations (this person’s salary would pay for itself many times over if they successfully identified the best and worst teachers and compensated them accordingly). They should drop in on classes unannounced, observe teachers in the hallways, talk to students and parents, etc.

Great teachers leave the profession because they aren’t compensated for their incredible work, and it’s just plain laziness to say “evaluating teachers is too hard” when employees are evaluated in basically every other line of work.

The last reason teachers shouldn’t make more money is because the market doesn’t demand it. If I’m a principal, why would I pay someone $80,000 to teach if there is another highly qualified teacher who would do the same job for $50,000?

Nurse Anesthetists make between $78k and $185k a year. Why? Of course they do very important work, but the high pay is because when a hospital or doctor needs one, there are very few to choose from. Supply and demand economics have set both nurse anesthetists and teachers salaries where they should be. And if your response is, “Well that just means low teacher pay is going to result in bad teachers,” then I’ll refer you to where I suggest we pay great teachers what they are worth.

Our Only Hope is to Privatize Education

From a practical standpoint, I realize most schools are run by the government and the government never does anything efficiently. They don’t pay for performance in basically any profession, and they are more concerned about getting a bigger budget next year than they are concerned with actually doing their job. I don’t live in some fantasy world where I think the government could ever make public schools work like a free market educational system.

Privatizing K-12 education is the only way to get competition back into education and get schools and teachers competing to be the best. The first step is to eliminate the federal Department of Education and give education back to the states (which is where our founders intended it to be). Then you’d have states implement voucher systems and school choice becomes real.

However, the implementation of my theoretical system is beyond the scope of this already extremely long article, so with that being said I’ll summarize.

I’m sure TeacHer wants more money. So do I and so does everyone else in the world. But there are three problems:

One more thing: don’t forget to read TeacHer’s side of the story!