Would You Buy Your Investments Today?

I’ve been reallocating my investments in my Roth IRA over the last few days working under one simple principle: Would I buy it today at the current price?

It was easy to sell stuff that had gone up and I thought was currently overvalued. For example, I was up about 10% on Las Vegas Sands (LVS). I don’t think the economy is going to be really strong over the next couple years and I don’t see people going to Vegas to spend a bunch of money. I sold for a small profit.

Unfortunately I invested in a few companies that were down 10-30%. For example my investments in Bank of America (BAC) were down from where I originally purchased, but when I look at the US banking industry I don’t see it going up. I obviously don’t want to take a loss, but I didn’t want to risk an even bigger loss.

I sold for a substantial loss.

When I looked at the unrealized loss with BAC, I had to ask myself the following question: Would I rather have $500 worth of BAC today or $500 worth of a Gold ETF (GLD)?

Selling for a loss is hard to do mentally, but selling Bank of America and buying gold is the easiest decision I’ve ever made in my life. When I thought of it that way I couldn’t sell fast enough.

Every Dollar You Have Could Go Somewhere Else

I used to think I needed to accumulate as many dollars as possible. Now I’m worried that the dollar isn’t a stable currency and I think it’s stupid to have a bunch of dollars without having anything that’s physically valuable (like a house). 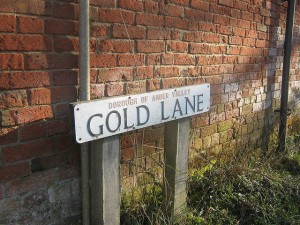 My only investment goal over the next 18-24 months to to have enough money for a 20% down payment on an awesome house. The problem is I don’t want to save up cash.

Yesterday the Federal Reserve announced another round of quantitative easing. That means they are going to print a bunch of money.

That also means that everyone’s dollars just got less valuable. If you are holding cash, you lost money yesterday. It’s important to be invested in something that will at least rise with inflation, and hopefully outpace it.

At the end of the day, I had to decide if I wanted to hold Bank of America or get gold, gold mining companies, big international companies, and the Australian dollar. It was a no brainer.

Readers: Are you holding any investments (stocks, ETFs, your house) that you wouldn’t buy today? If so, how are you going to change it?