Ask any of my friends to describe me in a few words. Well, you probably don’t know any of my friends, so I’ll tell you what they’d say after they were done talking about how I’m so good looking, intelligent and humble. I’m cheap. I’m a miser. Penny pincher. Tightwad. You get the point. 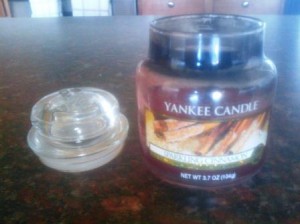 I saved about $0.72 on this masterpiece

I usually take these adjectives as a compliment. Saving money is awesome; especially when I’m saving to put it towards my retirement or something new and fancy from Best Buy. The only problem is, sometimes I get so obsessed over saving money that I do things that would immediately qualify me for a non-stop ticket to the mental hospital. I have spent absurd amounts of time doing something that will literally only save me a few pennies.

For example, I bought cinnamon scented candles from the Yankee Candle Company because I wanted to cover up the smell of “25 year old boy”. I bought one of the big ones where the wax on the edges of the candle is so far from the flame that it doesn’t even melt. I probably should have known better but I don’t know crap about candles. Well, when the wick had burned down to the bottom of the candle, but there was still a ton of wax on the sides.

When I looked at that side wax, I didn’t see Yankee Candle wax. I saw my hard earned money literally NOT melting away because I couldn’t burn that wax!

This was a travesty and I wouldn’t stand for it! Luckily, I had another smaller candle where all the wax was close enough to the wick that it would burn. Here are the next steps I took.

I didn’t realize the absurdity of this until I had some friends come over and they saw a knife and fork sticking out of a candle (I left them there to get more shavings when the wax burned down again!). If your friends are anything like my friends, I’m sure you can only imagine the crap I took for such a stunt.

I can’t help myself sometimes. I guess I really am a tightwad. Now let’s hear your story. Have you ever done something to save money that you thought was really smart at the time, but turned out to be ridiculous?

*This post was ranked #2 in the Best of Money Carnival out of over 60 blog posts! Plus it was an NFL Power Ranking theme and I got the Steelers. Only the Colts were ranked ahead of me and they lost this week. Sounds like I’m number one!