Invest in a Monopoly? Yes Please

Over the weekend, some friends from out of town came to visit and I spent the majority of my weekly allowance showing them the city.  And what better way to finish an evening but to play some classic board games.  I’m talking about MONOPOLY of course, the game that holds the Guinness Book of World Records’ record (yes, you read that right) for being the most played game in history.

The best known example of a United States monopoly is AT&T and its breakup into the ‘baby bells’, however, here we’ll take a look at what I think is the GOLD standard of what a monopoly can do. 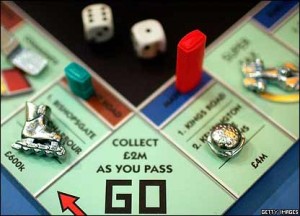 Standard oil gained its monopoly status through technological advances and then using the profits to buy out all competing firms.  By the early 1900s, it controlled over 90% of the world oil products.  Standard Oil then used its monopoly position and pricing power in the market to create barriers to entry (such as secret transport deals at a 70% discount).  At its height, Standard Oil would have an inflation-adjusted market cap of over $1 trillion (spelled with a T), most of which was owned by a single family: the Rockefellers.

Although a monopoly can create outsized profits for its investors, it is bad for competition and in the long run bad for the consumer.  In the end, Standard oil was broken up into around 40 separate companies which now represent every oil company you have ever heard of, including ExxonMobil, Chevron, ConocoPhilips, and Marathon.

Today, thanks to the Sherman antitrust act, companies are closely monitored so that they do not fall into the category of a monopoly.  But lucky for us, monopolies (and their outsized profits) still exist. They exist in the forms of natural monopolies and government-granted monopolies (like utility companies or copyright protection).

Potash is a perfect example of a natural monopoly. Potash owns over 20% of the world’s potash reserves which provides it with a natural monopoly based on natural resources.  Potash is an integral, naturally occurring resource used in the fertilizer business.  The rest of the world’s potash deposits are concentrated in Russia, Belarus, Germany and Israel.  This means Potash Corp. owns nearly all reserves that are geographical located near the United States.

By controlling such a large part of the market and having naturally lower transportation costs then competitors, Potash has significant pricing power, which is the holy grail of all monopolies.  At operating margins of around 30% this company has the opportunity for outsized returns to shareholders.

Another trend which will most certainly help fertilizer stocks such as Potash, is increased demand.  Just like Standard Oil was born out of an explosive demand for oil based products, the demand of agricultural products is now soaring along with the world’s population.  The United States Midwest is well positioned to become “the world’s farm” and Potash is conveniently located just a few miles north.

There are hundreds of opportunities to own natural and government-granted monopolies and you should always be on the lookout for these.  If you are looking for some other stocks in the fertilizer industry, take a look at The Mosaic Co.(NYSE:MOS) and Agrium (NYSE:AGU)

Disclosure:
I don’t own any

Kevin’s Take: I would need to do a little more research to determine what exactly potash is used for and how it is used in fertilizer. Last I checked, all you needed was a little cow poo to make some really good fertilizer. Warren Buffett only invests in companies that he understands, and I like to follow his lead; I’d need to understand this industry more before making and investment. If everything checks out, this one sounds good to me!

Important to note that ALL ideas, thoughts, and/or forecasts expressed or implied herein are for informational and entertainment purposes only and should NOT be construed as a recommendation to invest, trade, or speculate in the markets.