Is a Student Loan Bubble Ready to Burst?

I’m getting very, very worried about my 401k right now.

In fact, I’m getting very worried about all of my investments. I’m afraid we may be heading into a bigger financial disaster than the housing crisis.

Now I’m not an economist, and I’m also not a conspiracy theorist. I’m just a personal finance blogger who sees something that looks like a big problem, with nobody doing anything to address it.

You might be thinking, “Who cares about a student loan bubble? How does that affect my personal financial situation?” The fact is, any bubble bursting (think the Housing bubble in 2008 and the Dot-com bubble in 2000) will usually result in a recession or even depression. If you see a bubble burst coming, it is important to make practical changes to your financial life to prepare for these situations. Today I’m going to explain why I’m concerned about student loans, and tomorrow I will discuss where you can safely store your money or wealth in case of a double dip recession or even a depression.

Student Loan Debt is Getting Out of Control 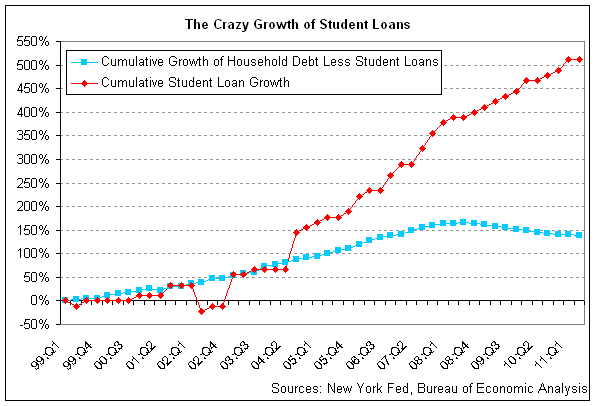 Does this mean we definitely have a student loan bubble? Not necessarily. This is just one piece of information that may have a reasonable explanation.

However, the costs of college are rising at an extraordinary rate (with no signs of slowing down), and college graduates are having a hard time finding gainful employment. When you have lots of people borrowing increasingly large sums of money, and many of those same people are finding themselves under or unemployed, it looks like a problem to me.

Remember the housing bubble? Part of the reason that bubble existed was because people who really couldn’t afford to pay mortgages were getting approved for very expensive loans. If there were more rigorous standards for approving people for home loans, we may never have experienced a housing bubble.

Now compare this to eduction, where basically everyone is eligible for Stafford Loans. There is no credit check. People with no money in the bank and no income are getting tens of thousands of dollars in loans. All you have to do is be a student and fill out a FAFSA, and you’re qualified.

Checking creditworthiness of the borrower before they enter college might be a good idea, but most students don’t have money. They are going to college to get a job and theoretically pay the loans back after they’ve received their education and found gainful employment. So wouldn’t it make sense to give loans according to projected earnings after graduation? The problem is, these loans pay no attention to the student’s major and gives all students the same availability of credit.

According to PayScale.com, someone majoring in Child and Family Studies is looking at making $29,600 a year out of college, and only $40,500 once they reach mid career. It’s also important to consider this is not only a low paying field, but also one with very low demand for new workers. Compare that to a Petroleum Engineering major, who is looking at $97,900 a year right out of college, and $155,000 once they reach mid career.

Common sense tells us that the average Petroleum Engineering major is more creditworthy than the average Child and Family Studies major. However, students in both programs are eligible for the exact same amount of student loans.

Any system where these two people have the exact same access to funds has a very serious, fundamental problem in my opinion.

Is This Bubble Going to Burst?

Again, I’m not an economist, so I don’t know if this really is a bubble or not. But let’s look at some of the facts.

In 2008, the average graduating senior had $23,186 in student loan debt (not including loans parents took out for their kids education). Since then college costs have risen dramatically every year, and more people are going back to school because they can’t find jobs in this economy. Who knows how high that number is today?

We have a very large population of people who have massive amounts of student loan debt. Many of those people have no jobs, and others have jobs paying much less than they expected to make when they took out such massive loans. Unless our economy gets kick started immediately, we will continue adding new graduates to the list of unemployed adults with enormous student loan obligations. This clearly is not sustainable and could reach a breaking point at any moment.

Maybe there is a Bubble. What Should I Do?

The most worrisome aspect of this entire situation is the fact that people aren’t talking about it. You can’t address a problem if you don’t recognize a problem exists. So either this isn’t a problem, or we’re all in big trouble.

I’m trying my best not to sound like a conspiracy theorist, but this has me really worried. Even if there is a 5% chance that this bubble does exist and may burst, then I think it’s important to put at least a portion of your net worth into assets that would maintain or even rise in value during this scenario. Check out my post on Preparing for a Bubble Bursting when I give my suggestions on how to financially prepare for the worst.