Is Your 401k Safe From the Government?

I recently took a loan from my 401k to buy my first house (which is closing next week and I’m super excited about) and one of the reasons I’m comfortable using 401k money now is because I have no idea what the government is going to do with retirement funds in the future.

The other day I read an article suggesting that President Obama wants to nationalize all 401k, 401b, and IRA accounts, force people to invest in government bonds, and institute a 100% early withdrawal penalty and eliminate the option of taking a loan from your account.

That would mean the government would take your retirement savings, spend it on whatever it wants, and give you an IOU that is redeemable when you are at the retirement age.

Before you get too worried about “Now Obama Wants Your 401k” it should be noted that as far as I know Obama never said any of this.

The author of the article is trying to paint a very scary picture, but the only proposal that has come from Obama and the democrats is automatically enrolling employees without an employer-sponsored retirement plan into a direct-deposit IRA. Employees would be given the opportunity to opt out of this (if it ever were to become law).

The other stuff in the article talks about how certain unions and organizations would like retirement income to become a government entitlement, as opposed to a privilege for those who make responsible financial decisions before reaching retirement age. While these organizations do support Obama and the democrats, I’ve found nothing yet that suggests Obama would adopt these proposals and try to pass them.

But what if he did?

Your 401k and/or IRA Might Not Really Be Yours

The current laws of the United States say that the money in your 401k is yours. That’s a fact.

You can take loans against your 401k or withdraw the money early if you are willing to pay taxes plus a 10% penalty.

But tomorrow those laws could be different. What if popular opinion says that it’s not fair for some people to have 401ks when others don’t have any retirement money? What if the government decides that they are too far in debt and they need money, so they pass a law that says all retirement savings must be invested in US government bonds and early withdrawals are not allowed?

You wouldn’t be able to stop it.

The government does what it wants.

All of us responsible savers who use 401ks and/or IRAs (myself included) are using these financial vehicles simply hoping the laws that govern these accounts will remain favorable to the individual saver.

I honestly don’t know if that is a safe assumption.

What to Do if You Don’t Trust Retirement Accounts 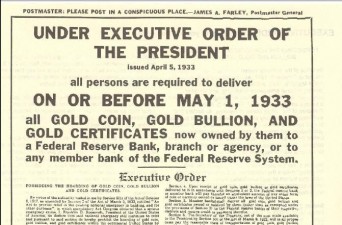 If they did it once, they could do it again.

Unfortunately, we can only live according to the laws that are on the books right now and keep a watchful eye out for any new legislation that is proposed in the future.

Personally I will continue to use my 401k and my Roth IRA, but if I ever read something that even suggests the government is actually considering legislation to restrict access to retirement funds, I will pull my money out immediately; long before anything is ever put to a vote.

Paying taxes and penalties on getting my money now is MUCH better than having that money locked into an account I can’t touch for decades.

Readers: Do you think the government will come after retirement savings? How would you feel if they did?