Lack of Experience Can Be Your Biggest Strength – Part 1

One of the biggest excuses I hear from people when they can’t get a job or a promotion is, “I just don’t have enough experience.” Maybe a potential employer has told them they need more experience, or even worse, they have convinced themselves that they aren’t good enough.

Baloney! Just because you haven’t done something, doesn’t mean you can’t do it!

Let me tell you a little story about how I didn’t let my lack of experience get in the way of pursuing lofty and seemingly unrealistic goals.

My Journey to the State Championship

The summer before I was a senior in high school, I decided that I was going to place in the top eight in the 100 breaststroke at the State Championships. A lofty goal by most standards.

Perhaps even more lofty for me, considering I wasn’t really a swimmer.

Let’s start from the beginning. 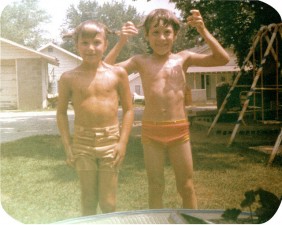 When I was a kid, my mom put me on the summer league swim team. I was on that team from roughly ages 6-11. I was an average swimmer in a non-competitive summer league. Basically, I learned the fundamentals of swimming without ever getting very good at it.

Around age 11, I stopped swimming. I was concentrating on being a major league baseball player at the time and had no desire to swim. As far as I knew, I was done racing in pools for the rest of my life.

Fast forward to my sophomore year of high school. At the end of the fall, one of my friends from the football team suggested I join the swim team for the winter.

I was cut from the basketball team my freshman year, and then tried and subsequently sucked at wrestling. Swimming was the only sport left, so I thought I would give it a shot.

After a four-month season of daily swim practice, my best time in the 100 Breaststroke was a 1:20. You need at least a 1:06.99 to qualify for State, and realistically you need a 1:04.00 or lower to place in the top eight. To summarize, I was a below average swimmer on a below average swim team. Pretty awesome huh?

I had no desire to swim my junior year. I wanted to train for football and work my part time job. I had a car to pay for and needed that thing running to impress the ladies.

However, the swim team had a new coach and he desperately wanted swimmers. He begged me to join, and I told him that I would on two conditions: I would be a diver and I would only practice 2-3 days a week.

He agreed, and I started diving a few days a week. To be honest I was an even worse at diving than I was at swimming, but diving was much less physically exhausting, and was the only way I could get away with three practices a week.

Then one day during a meet, the swim team was short a swimmer on the C Relay team (slowest team) and the coach asked me to fill in. I swam a 50 freestyle, and surprisingly swam it faster than anyone else on the C Relay.

Without any practice over the last year, I had actually gotten better. Coach was impressed, so the next meet he moved me up to the B Relay.

I was the fastest guy on that team too.

By the end of the season I still hadn’t done a single swim practice, but I competed in three swimming events (along with diving) at the Conference meet. I ended up being All-Conference in the 50 freestyle (3rd out of 30) and sucking pretty hard in diving (5th out of 7). I still wasn’t close to qualifying for state, but it was painfully obvious that I was better at swimming than I was at diving.

The Summer Before my Senior Year

At this point, I had decided to stop playing football and devoted the summer to becoming a swimmer. It would be the first time in my life I practiced swimming for more than four months at a time. (side note: the biggest regret of my life is not playing football my senior year, but that’s a different story)

I worked with my high school coach on a local summer league swim team (very similar to the one I was on as a child) and swam in the mornings before the kids’ practice. I also decided to go back to my roots and focus on swimming breaststroke instead of the freestyle I swam during my junior season.

If you remember from earlier, my 100 breaststroke time from my sophomore year was a 1:20. In my first summer race, it was down to a 1:12.

I was still over a second away from a state qualifying time, and 4-5 seconds away from realistically competing for a place in the top eight. Dropping four or five seconds in a few months is unheard of for swimmers, but I had done it in a few weeks. And I planned to do it again over the next few months.

At this point I had never even won a single high school swimming race in my life, but I decided I would be one of the eight fastest high school breaststrokers in the state of Missouri.

Talk about setting lofty goals without having experience. It looks like I was just setting myself up to fail.

Come back tomorrow for Part 2 and find out if I reached my goal. I’ll also share the lessons I learned from this story that are applicable to every day situations and decisions.