Yesterday I posed a question about whether or not you would pull the plug on a rich uncle to receive $35 million in estate tax benefits, but I didn’t give you my answer. Well here it is.

I would not pull the plug.

My main reason for not pulling the plug is because I believe in miracles. Would he wake up? Probably not. Could he? Absolutely. Life is too short to arbitrarily cut it short, especially when the guy obviously has the money to pay for his hospital care for as long as he can.

This would be so much harder if I were faced with a real $35 million (instead of this pretend scenario), but in the end, I think the money should have little if any influence on the decision.

I had some help coming to this decision with some great comments, and I want to share them with you.

I agree in principle. I’d want to keep him alive because he has a chance of at least a few more good years. However this rule isn’t written in stone for me. Take the same situation, but make Uncle Dan 98 years old, and I’m going to pull the plug. There’s just not a whole lot of life left for him to live.

I guess in either case, estate taxes would [not] be a factor.

Finally, the most thought provoking post of the day came from Darla, who says we should all be prepared for a situation like this so it never becomes a problem.

It seems so simple, but how many people actually have an Advance Medical Directive? Do you?

I don’t. I didn’t even know what one was until I looked it up today. An Advance Medical Directive is made up of three parts:

I’ll be honest: I don’t really know the proper way to do any of this stuff, but I’m gonna give it a shot right now. 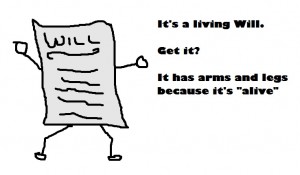 My Living Will – If I become incapacitated, I would like to be kept alive. I also ask that doctors do whatever it takes to get me better. Dangerous experimental procedures? Sign me up. Crazy awesome drug with crazy horrible side effects? Count me in. I saw a guy got cured from AIDS with a bone marrow transplant. Give me one of those and let’s see what happens! Either make me better ASAP, or get me into the next life trying.

My Health Care Proxy – I want my Mom to be my health care proxy. I know she’ll always do what’s best for me. Option number two is Dr. Gregory House (I mean Hugh Laurie, but I’d like him to make decisions in the character of Dr. House).

Power of Attorney – Again, my Mom will take care of this. She rocks! My second option would be Warren Buffet. I’d fully expect to wake up years later with a large portfolio of unrealized long term capital gains.

In the unfortunate situation that I need one of these things, I hope some court somewhere is smart enough to realize that just because I didn’t fill out the proper forms, I’ve made it clear what I would like. If only our legal system made so much sense. *sigh*

Now I pose the same question to you: Are you one of the 80% of Americans without an Advance Medical Directive? If you don’t have one yet, are you going to make one? Also, does anyone actually know how to do this stuff the right way?