It pays to know the law.

The bank that owned the mortgage foreclosed on the owner, and then the bank went out of business. At that point, Kenneth Robinson did some research, determined it was a vacant property, and moved in.

Here is and explanation of the law, adverse possession, that Mr. Robinson used to claim the property, from ABC News.

Adverse possession is a common law concept developed in the 1800s. According to Lucas A. Ferrara, a partner in Newman Ferrara, a New York City real estate law firm, adverse possession was enacted to ensure that property wasn’t abandoned and was “maintained and monitored.” It requires the posting of a clear, public notice that someone is at the property — hence the court filing — and that someone would remain there for a specific period of time, usually 10 years.

Basically, Mr. Robinson used an outdated but entirely legal method of obtaining this house. At least that’s what it looks like to me. So did his neighbors come over and greet him with fruit cakes and pat him on the back for beating the system and getting a free home?

They are pissed. Every month they pay their mortgage, they are going to get more angry with him. They will continue to work hard to earn money to pay off their homes while this guy lives next door for $16 freaking dollars!

From the news story, it looks like the neighbor may go as far as hiring lawyers to comb through Texas law and find something that denies his right to the property. They want him out bad!

It’s Legal, but is it Right?

Just because something is legal doesn’t make it morally permissible. I’m going to assume the law is on Kenneth’s side (although if you are a lawyer and know otherwise, please let me know in the comments), but the question remains:

Do you think it is morally acceptable to use an antiquated loophole in state law to claim a property? 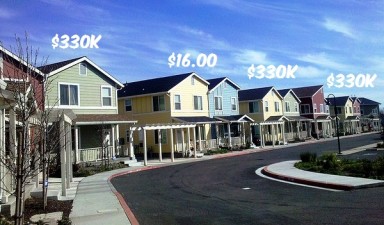 I personally don’t think he is the rightful owner. I actually started writing about how I think he has a legitimate moral claim to the home, but then I started thinking more.

The home used to be owned by a person who didn’t pay the mortgage. Then it was owned by a bank, who went out of business because they couldn’t pay their bills. It seems logical to me that the rightful owner of this house would be the bank’s creditors. Certainly the bank must have unpaid debts, or else they wouldn’t have gone out of business.

This house should be sold at auction and the money should be used to pay those debts. This man has no moral right to property that should belong to someone else. I honestly don’t even know how the house wasn’t auctioned off when the bank went out of business. If, in some crazy scenario, the bank that went out of business had no debts, then the house would belong to the bank. The home should still be auctioned, and the proceeds should go to the owners/shareholders.

That’s how I feel, so now I’m ready for your opinion. Is using adverse possession morally acceptable? If so, why? If not, then who should own the house? Leave your comments below.