I would like to know when taking a risk with your money became wrong.

I understand taking a risk with your money can be dangerous. It can be stressful. It is, of course, risky.

But when did it become wrong?

A few weeks ago I was commenting on Consumerism Commentary and Flexo wrote an article about selling some company stock he had earned when he was employed with some company in the past. The stock was much lower than it’s pre-recession high, but Flexo sold all of his shares and made a profit overall. I offered my opinion on the situation as follows:

If you don’t believe it is going to go up, then definitely sell. If you think it will rebound and you can make a nice profit, then hold. Looks like you are making the right decision based on how you feel about the company.

Either decision is acceptable. Time will tell which was right and which was wrong, but since none of us know the future, both holding and selling are reasonable decisions.

That is, unless you believe Mr. Evolution of Wealth. Here are the first two sentences of his response to my comment:

Kevin:
No offense but that is pretty scary advice. You should make financial decisions on what you believe?…

Apparently my advice was not only bad; it was downright scary! You can read his whole comment here about why, according to him, it is absolutely wrong to invest a significant portion of your portfolio in company stock. 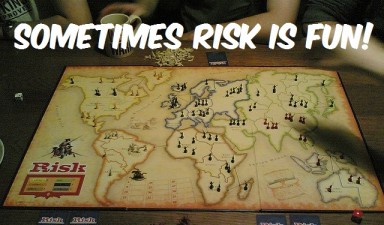 And if we aren’t supposed to make financial decisions on what we believe, then how should we make them? Maybe we should do it based on what Mr. Evolution of Wealth believes? I don’t think so!

His main point (and the point of most other commenters on that article) is that having too much money in one company is too risky. And risk is bad. Risk is very bad! RISK IS DANGEROUSLY BAD!

Bull Skittles! (that’s my PG version of B.S.) Risk isn’t inherently good or bad. It’s just risk. The more risk you are willing to assume, the higher your potential for gains and losses.

These people will dismiss it. They will call it blind luck. Worse, they’ll say it isn’t sustainable. They will try to make you believe over-exposure to any company will eventually destroy your wealth if it doesn’t do so instantly.

Tell that to people like my great grandmother who earned a few thousand dollars of Walgreens stock decades ago and held it until her death. It was worth millions when she passed.

Tell that to employees of Apple or Southwest Airlines or Walmart who have been at their companies for 30 years and have held their portfolio exclusively in company stock. Those people are probably swimming in money and laughing their butts off at their friends who heeded the “diversify!” advice.

There is also a flipside. Think of all the Enron employees that held their portfolio in company stock. They lost everything. That’s the negative risk you take when you don’t diversify.

If You Want Big Returns, Be Prepared for Big Losses

If you want all the potential for Apple-esque gains, you need to be prepared to accept Enron-esque results. That’s the magic of risk; it goes both ways. Would I hold 100% of my portfolio in company stock? No. But I am holding 50% of my 401k in company stock.

I understand the risks and I accept them.

I’m honestly prepared for 50% of my 401k to go all the way to $0. I doubt it will happen, but if it does, I’m young and will have plenty of opportunity to make that money back. Please don’t lecture me on it in the comments; I understand the risks.

I’m also prepared for the upside of risk. I’m prepared for 50% of my 401k to double or triple in the next few years. If that happens, won’t all those people with fully diversified portfolios be jealous?

I’m taking big risks with my money because I’m hoping for potential gains. Is it risky? Absolutely. Is it wrong? Only time will tell. But let’s get one thing straight: