Have you heard about Amanda Clayton? She’s the $1 million lottery winner who is using food stamps to buy groceries. A lot of people are furious that she would have the audacity to continue receiving benefits after winning so much money.

Look at some of the comments on the original article: 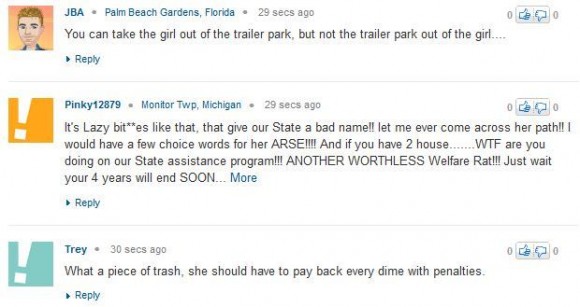 Those are some pretty hash words.

Before we go any further we need to clarify something: she is legally entitled to food stamps. There is no law in Michigan that says you can’t be on food stamps if you win the lottery (although they are trying to pass a law now that would do exactly that).

I’m not angry at Amanda Clayton. She’s obeying the law and taking the benefits she is legally entitled to receive. You might think certain tax laws are stupid, but that doesn’t mean people have an obligation to willingly reject benefits or give the government extra money (see: Warren Buffett).

I made over $60,000 last year, but I legally lowered my tax burden via 401k contributions, HSA contributions, charitable donations, student loan interest deductions and investment losses. I didn’t “need” to reduce my taxable income to keep a roof over my head and food on the table; I did it because I had a legal right to do so. Does that make me a bad person? Hardly.

The Government is Too Dumb to Get Charity Right

This situation is a great example of why the government is so terrible at “charity”. They can’t even write the rules well enough to prevent people with a net worth of hundreds of thousands of dollars from receiving the benefits.

Why don’t we reduce taxes and let charities and communities be responsible for feeding our neighbors?

She’s smart enough to realize that her lottery winnings aren’t going to last her a lifetime, and she’s legally accepting $200 of monthly benefits from the state (to which she just gave $30,000 in taxes). If you don’t think she deserves the benefits, then don’t get mad at Amanda Clayton; get mad at the state of Michigan and the government’s horrible mismanagement of providing food assistance.