What do you get when you cross a large German man with an itty bitty Midwestern girl?

A great month for me in the Race to $1 Million, that’s for sure.

The Hoff spent much of the month of July in Hawaii wooing his girlfriend into marrying him. That’s right, The Hoff is engaged. Luckily for me and our race, his elaborate ploy to tricking this poor, unsuspecting girl into marrying him is the reason his net worth has been tanking the past few months.

And this month was the worst of it. 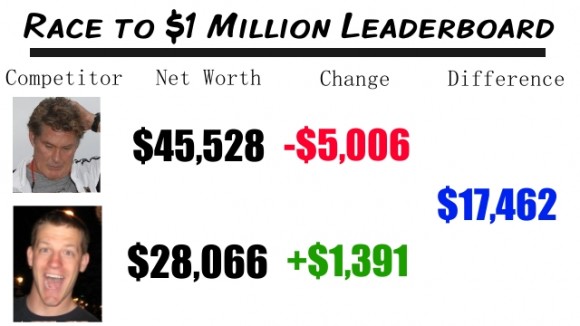 I caught up $6,399 since last month. And I thought Tag was expensive!

Getting Engaged Can Break the Budget

Some people take their girl out to dinner and put the ring in a glass of champagne. Some people get down on one knee. Some people put on an impromtu musical in Disneyland.

The Hoff trumps all of those people. (well, the musical is debatable, but those lyrics could have been way better)

Our favorite German told his lady that he was planning a vacation for the two of them to go to Vegas and the Grand Canyon, when in reality he planned to take her on a tour of the Hawaiian Islands. She had no idea she was going to Hawaii until the connecting flight in LA started going West.

They stayed in fancy hotels, ate fancy food, rented cars or took taxis or however they got around places. Oh, and I hear engagement rings can cost a few bucks. At the end of the day, this was a very expensive trip. However, The Hoff is a pretty frugal guy and did use a few tricks to find some great deals. Hopefully he’ll share them with us one day!

But despite his best money saving efforts, he couldn’t avoid the big expense of a Hawaiian vacation for two. It was a great month for him and his girlfriend. Arguably a better month for me in this competition!

Actually, now that I think about it, this could be terrible. Sure I’m getting a big boost right now. And I’ll probably get an even bigger one when they plan the wedding (assuming The Hoff has some financial obligations there). However, I’m looking at a complete wild card. when the fiancee turns into a wife.

Unless his fiancée is strapped with debt or decides to stop working, this will have a very negative long term impact on our race.

I’m getting a little scared. Maybe I should try to break them up…

In all seriousness, I’m really excited for these two, and I’m proud of The Hoff for giving his fiancee the proposal she deserves. There are definitely more details of this great engagement story to be shared. Maybe with enough encouragement in the comments, The Hoff will tell the rest of the details in a post one day!