Ron Paul Needs to Be the Next U.S. President

Ron Paul needs to be the next President of the United States of America.

Wait… huh? What does this have to do with personal finance?

Did you lose money as a result of the housing bubble bursting? Or maybe you lost your job, or your house lost tens of thousands of dollars in value. Would you be better off financially today if you could have seen the recession of 2008 coming in way back in 2003? Of course you would.

Ron Paul predicted the housing bubble bursting five years before it happened, and quite simply your money is in serious danger unless Ron Paul is our next president.

So Ron Paul knows economics, but why else does he deserve to be president?

I’ll let our founding fathers tell you why.

“We must not let our rulers load us with perpetual debt. We must make our selection between economy and liberty or profusion and servitude.” – Samuel Adams

Washington D.C. has a spending problem. The deficit under President Obama is the highest it has ever been. Before him, it was the highest its ever been under Bush. Under both parties, the federal government has gotten used to spending well beyond its means, and the isn’t one other candidate with a real plan to cut spending.

Ron Paul has a plan to cut $1 trillion of spending in the first year. It would essentially bring us back to 2006 spending levels. Some people think cutting $1 trillion is outrageous and dangerous. I don’t think federal spending in 2006 was at dangerously low levels. Do you?

America is $15 trillion in debt. If you count unfunded liabilities (for example, all the Social Security and Medicare money we owe to our seniors), it’s closer to $75 trillion! Any honest person realizes that is completely unsustainable and needs to be fixed immediately.

If we don’t want the US economy to destroy itself and become like Greece or Italy, we have to cut spending. Ron Paul is the only person running for president who has laid out a specific plan to dramatically cut spending and balance the federal budget within one presidential term.

“The great rule of conduct for us in regard to foreign nations is, in extending our commercial relations to have with them as little political connection as possible.” – George Washington

“Peace, commerce, and honest friendship with all nations, entangling alliances with none.” – Thomas Jefferson

He does not believe in being the overprotective smothering parent of some countries that would be better off with their own sovereignty (Israel). He also doesn’t believe in being a bully who drops bombs and invades any country that has a nasty dictator and oil reserves.

Extremists in the Middle East do not hate America because of our freedom or our lifestyle. We’ve been free for centuries, so why haven’t they tried to attack us before?

Furthermore, Switzerland has been free for centuries and is a much more convenient target. Why don’t the terrorists attack them instead of the US? Maybe it’s because Switzerland hasn’t put soldiers on their holy land and dropped bombs on their neighbors’ homes.

Ron Paul believes that if we need to go to war to protect ourselves against an imminent threat to America, it should be declared by Congress, we should fight it to win, and we should come back home. He believes in a very strong DEFENSE, while at the same time a significantly reduced MILITARY.

Some people call his foreign policy “radical”. Sorry, but I don’t live in a world where the policy of George Washington and Thomas Jefferson is more radical than losing thousands of American soldiers and killing hundreds of thousands of Iraqi’s in an unnecessary, undeclared war.

Ron Paul wants to bring our troops home from everywhere (not just Iraq and Afghanistan) so we can protect our own borders and get out of other people’s business so they don’t have any reason to hate us. He’s the only candidate running today with a Jeffersonian, non-interventionist, common sense foreign policy.

“A private central bank issuing the public currency is a greater menace to the liberties of the people than a standing army.” – Thomas Jefferson

How is it even possible for us to engage our military in never-ending wars, spend trillions of dollars on entitlements, and have the federal government involved in almost every aspect of our lives? The only way America can afford all those things is to print the money to do it.

Ron Paul understands that a private central bank enables massive government spending, inflates the money supply, makes us all poorer, and destroys the foundation of our economy. A business exists to create profit. How then can you trust a private business to print money? It makes absolutely no sense.

We need sound money for our economy to thrive, and that can only happen when the Federal Reserve turns off the printing press. Sorry folks, but I don’t trust private bankers (or politicians for that matter) to “do the right thing” when they literally have the ability to print money at their discretion. Money needs to be backed by physical assets such as gold and silver again, and Ron Paul will get us there.

If you like what you read, there are a lot of things you can do to help Ron Paul win the Republican nomination and restore liberty to America.

Ron Paul is in a great position to win the Iowa caucuses and potentially take first or second in the New Hampshire primary. If he can do this, he has a real shot of winning the nomination and fixing America. Please do whatever you can to bring real change to Washington D.C. 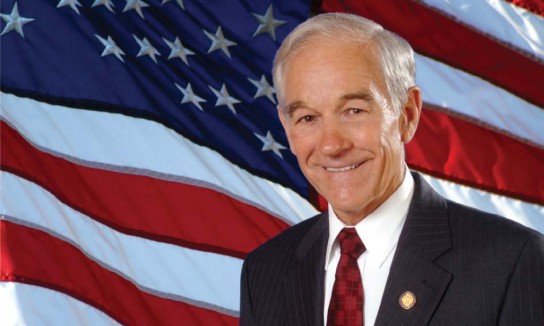