Should You Pay for Puppy Training?

I can’t believe it’s already been over a month since we bought our puppy!

Sydney came to us in the beginning of February weighing somewhere around seven pounds. Now she weighs about 13 pounds. She’s already almost doubled in size!

When we adopted Sydney, we also bought two different books about Australian Shepherds that specifically address how to train your puppy to be a good dog.

I also had some experience from training the puppy my family got when I was about 15 years old. Surprisingly I remembered quite a few of the commands and how they were taught.

I thought between the books and my experience over a decade ago that we didn’t need to pay for dog training. Tag, however, insisted that we take her to a puppy training class.

Puppy Training is Worth It!

Sydney has gone through three weeks of puppy training so far. She is only about 3 months old but she’s already very good at “sit”, “down”, “touch” (which is where she touches her nose to your hand, which is good for training loose leash walking and a foundation for agility if we go that route). 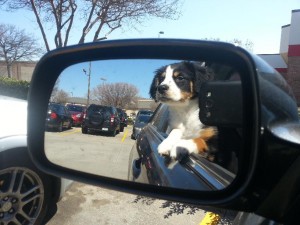 She hasn’t mastered but is doing a good job with “stay”, “drop it” (drop a ball or toy), “leave it” (stop paying attention to something interesting to her, like a treat or a dog barking in the distance), “shake” (a worthless command but fun party trick), “gentle” (stop biting hard, nice for giving treats), “go visit” (she waits for this command before going to see new people/animals), and more.

And we still have a few weeks left before this training is complete.

I thought I could train her myself, but all I really knew was sit and down. Dog training is not easy, and training a dog to be REALLY good and obedient is extremely challenging. We wouldn’t be this far if it weren’t for the training.

Socialization is Great for Puppies

One of the best side benefits of dog training is that Sydney gets to meet other puppies. There are about 10 other puppies in her class and she gets to play with them at certain times during the training.

We’ve read that she should meet at least 100 other dogs before she hits about 6 months if we want her to be really comfortable around other dogs when she is an adult. This is a great way for her to meet some new dogs.

We’ve also found that old dogs don’t really like her. She’s too wild and crazy for them, and they get annoyed easily with her energy level (heck, I don’t blame them!). However, the puppies in the class are just as crazy as she is and they love to play!

The Return on Investment is Immeasurable

We paid $150 for a six week puppy training course. That’s $25 each class which includes techniques for how to train the most basic and important commands, and built in socialization.

And this investment is going to last for the next 10-15 years. Find someone with a crazy dog that doesn’t listen to commands and doesn’t play nice with other dogs. Ask them if they would be willing to pay $150 for the dog to be well trained and socialized, and I bet you’d get about 100% say they’d pay it.

We spent $350 on her adoption fee and probably another $350 on toys, a crate, food, books, shots, and other stuff. It would be stupid to spend $700 upfront for a puppy, but be unwilling to spend $150 to help her be great for the next decade.

Readers: Have you ever spent money on training for your pets?