Every now and then, I get an idea to start a business. It consumes me for the better part of a day or two. I can’t stop thinking about how great it would be and why it’s such a good idea. Then I finally start thinking about implementing the idea, and my world comes crashing down.

I don’t have the money or time to start a new business. Right now I’m building this blog and doing everything I can to make Thousandaire a profitable, sustainable entity. Another business would take time, money, and passion that I don’t have for all the ideas that pop in my head. Then it hit me; maybe one of my readers can do it.

And thus, the “Start This Business” series is born. Every now and then, I will post a real business idea that I believe would be a profitable venture, but I don’t have the means to execute the idea. If you have the time, money, and entrepreneurial spirit, you are welcome to take one of these ideas and run with it. Then when you become a billionaire, if you want to send me some kickbacks for helping you out, I will graciously accept them.

If you don’t want to start a business (or just don’t trust any of my business ideas) then feel free to read a look and give me your opinion. I’m curious to know if you think I have some good ideas or if I’m just a pretty face and a marginally talented musician with air between my ears.

I bought Portal 2 last week and played it all weekend. I beat the game and I’m done with it. It was fun, but it’s definitely not something I would ever want to play again. I want to get rid of the game while it’s still new and relatively valuable, but unfortunately there isn’t a good place to do that.

Sure, there are tons of places to resell video games. I can go to my local Gamestop and they might give me $2.41 of store credit. I can try to sell online at Amazon, eBay, or Half.com, but none of those places is known as THE place for video game selling, so you have all the video game buyers and sellers spread all across the entire web. Plus, what if I would rather trade my game then sell it? 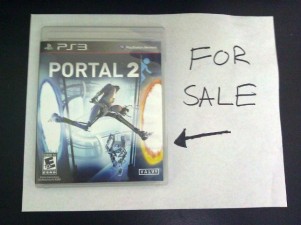 I’m sure there is someone who doesn’t have Portal 2 but wants it. I’m also sure there is some other game that I want but don’t have. If there were a website that could connect me with the aforementioned person, we can trade games instead of selling them and just pay for shipping.

There would be three ways for the customers to use the site. The first is a peer to peer selling site (similar to half.com) where they set a price and wait for a buyer. The second would be an option to just sell your game directly to the company for a much lower price (similar to Gamestop). The third would be the swap option (unlike anything available).

Monetizing the first two things would be no different than how Half.com or Gamestop do it. Let the people sell to each other and take a small fee, or buy the games for dirt cheap prices and sell them for more. For the swap, you could charge some kind of fee like $1 per swap or $3 for unlimited monthly swaps. Customers pay the shipping and everything, so you are just making money for connecting Person A to Person B.

If this website existed today, I would totally be using it right now to sell or trade Portal 2. Instead, I’m just writing a blog post about it. It’s really just taking two established business models that already work, adding a third that is brand new, innovative, and awesome, and then lumping them all together. It creates one central hub for buying, selling, and trading video games.

So there’s a million dollar idea. Whether you’d make $1 million with it or lose $1 million, I can’t say for sure. I do know that I would love to use this service if it existed. What do you think?

EDIT: One of my readers brought Mooch to my attention. They basically offer everything I wanted with one small problem: they don’t have enough users. I put Portal 2 on there and as far as I can tell, not one single person wants it. That shows me that people aren’t using the site, because it’s a very popular new game. Now the question is, how would you advertise this thing, and how much money would you spend? They have the infrastructure in place but not the customer base. I think they need to connect with video game bloggers and youtubers. What about you?

EDIT 2: Doing some of my own research, I found Goozex. This is another video game swap site. I don’t like the interface as much as Mooch, nor do I really like how it’s not really a trading site (you essentially trade your game for points, and then use those points to buy other games). While I’m not a huge fan of how it works, this site actually does have a decent customer base and plenty of options for trading. Lesson learned: search harder for a business to see if it exists before posting a “new idea” to my site. I’m dumb.