I’m taking a vacation this week and flying into New York City on Wednesday. Then I fly out of Boston the following Wednesday. Somehow I have to find a way to get from the Big Apple to Matt Damon’s hometown, and I don’t want it to be expensive.

Is this Kevin McKee or Matt Damon?

Segue #1: One time I was traveling in Europe and someone told me I looked like Matt Damon. This was right after he was voted the “Sexiest Man Alive” by People Magazine. Of all the things I want to do when I get to Boston, the number one thing is to have someone mistakenly believe I truly am Matt Damon and ask for my autograph. I have a feeling I will be disappointed.

A slight resemblance, but I don't have those bushy eyebrows

Recently, I was at a funeral and was told I look like James Van Der Beek. If no one has ever told you that you look like anyone, you can go to MyHeritage.com and let them tell you. After a trying a few pictures that came up with multiple female results (including Julia Roberts I might add), here is the best I could come up with. While I really don’t look like any of the guys on here, I’m okay with Johnny Knoxville and Matt LeBlanc. Call me crazy, but I don’t really see a strong resemblance between me and Shingo Katori or Donovan Bailey. Finally, I thought these were celebrities; who is Shingo Katori? 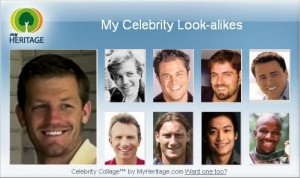 Travel Option #1 – Airplane: I need to travel from New York City to Boston at some point over the next week, because my flight home to Dallas leaves from Boston. I almost always fly Southwest when I travel, so I decided to see how much a flight would cost. Even if you buy the ticket weeks in advance, it still costs over $100.  Southwest is usually the cheapest airline, but I checked out Expedia.com and found that you can get tickets for about $49 including taxes and flight fees if you book in advance. That doesn’t include checked baggage fees or any other extras, but the base price is pretty reasonable. I was prepared to get that plane ticket if I needed, but wanted to explore other options as well.

Segue #2: Whenever I fly, I usually go to Southwest Airlines first, and if they have a good price on a flight, I just take it. They are usually the cheapest, but that’s not the only reason I use Southwest so much. 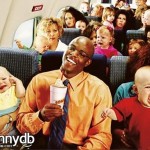 "Excuse me, do you mind if I move into an overhead compartment?"

Travel Option #2 – Train: My next stop on looking for cheap travel was Amtrak. To be honest, I’ve never used the government-run rail company because I’ve always found them to be expensive and I’ve heard some bad stories, including “Hey, where are you from… Well, I just got out of prison.” I can’t really blame the clientèle on the company, so I gave it a look and if you order tickets in advance, you can get them for $49. This actually isn’t bad compared to the airline, especially because you get two carry on and three checked bags absolutely free on the train service. It does take a lot longer than a flight though. For the $49 fare, it is going to take over five hours for the trip. The shortest trip is 3 hr, 35 min, but that ticket costs $126. I’m not in a hurry so I am willing to take the extra time on the train if necessary, but I still think there has to be a better way to travel between two cities that are so close together.

Segue #3: Maybe it is because I was just in college two years ago, or maybe it’s because I’m so thrifty, but I didn’t even consider getting a hotel or hostel on this trip. I have friends in New York and Boston, and am planning to stay with them in each city. This way I get a free place to stay, I get to see my friends, and I get either a local tour guide or at least advice from someone who lives in the city. I’d be interested in seeing some research on what types of people stay with friends as opposed to getting a hotel. Are most young, single people staying with friends? Do most married folks with families stay in a hotel? What about married couples without kids? If you know of any information on the subject, post a comment and let me know. Bonus points if you have info on Couch Surfers. 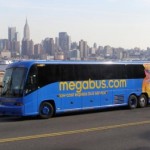 The Megabus is Mega-AWESOME!

Travel Option #3 – Bus: Without exploring other “outside the box” options like hitchhiking or posting a “Need a ride to Boston” ad on craigslist, I found the cheapest way to travel between the cities: Bus. There are actually a few different companies that can get you from New York to Boston for a small price, but I went with Megabus. For as little as $1 (if you buy a ticket far enough in advance) you can ride a Megabus between cities. The luggage policy is less than ideal (one large piece of luggage, one carry-on, and then more only if there is room), but they have free Wi-Fi, nice buses, and a reasonable travel time of just 4 hrs, 15 min from NYC to Boston. This will be my first ride on a Megabus so I can’t personally vouch for the experience, but I have heard it is a pleasant experience. And even if it’s not luxurious, my ticket cost $9.50. As I found during my research, that’s a hard price to beat.

I will give an update on my Megabus experience, potentially even during the ride thanks to their free Wi Fi. If you have any opinions on the travel methods I’ve talked about here, or ideas of which celebrity I look like, please leave a comment below.