The Durbin Amendment Stole Your Money

Back when I used to write about fantasy football, I was always terrified of people reading my old posts. Basically, my job was to predict how well professional football players would perform in their NFL games. I was wrong. Frequently.

If anyone ever decided he didn’t like me, he could just read any one of my old posts and find predictions I made that turned out to be wronger than a mullet on a little baby girl. Awesome side note: “wronger” is a word!!!

Luckily I don’t make many predictions on this site. While it’s possible that I’m wrong sometimes, it would be very hard to actually prove it. The one exception would be stock picks, most of which were made by The Hoff. For the few picks I made, let’s just say that the amount of money I’ve lost in the stock market is way more painful than any ridicule someone might give me for my less than wonderful predictions.

However, I did make one prediction a few months back and I think it’s a good time to revisit whether I was right or wrong. My prediction: The Durbin Amendment would harm consumers while it lines the pockets of business owners.

The Durbin Amendment STOLE Your Rewards

Back in March I wrote about how the Durbin Amendment Wants to Steal Your Rewards. It put a cap on interchange fees for debit card purchases, meaning the banks make less money; therefore, they can’t pass any rewards along to their customers.

It wouldn’t take a genius to figure out that debit card rewards were going to disappear. It’s a pretty logical result. However, just to prove consumers lost this benefit, here are a few examples of debit cards that discontinued rewards programs here and here and here.

The theory behind the legislation was that retailers would pass those savings along to customers. I’ll quote Rachel Wolf in a CNN article I quoted half a year ago:

“Because retail is such a competitive industry, any savings retailers get they are going to pass along to customers, because if you don’t offer competitive prices, someone’s just going to go across the street to the competitor.”

So now that the Durbin Amendment is in place and we’ve all lost our debit card rewards, let me ask my price conscious readers: Have you seen prices drop?

The Durbin Amendment was never about doing what’s right for consumers. It was always about one thing.

Let’s review what happened thanks to the Durbin Amendment

*Organizations like the National Retail Federation and businesses like 7-11 have publicly praised Dick Durbin for this amendment. I’ll let you decide whether or not you think there were any undisclosed monetary “thank you’s” sent his way.

The Durbin Amendment was incredibly successful at taking money from consumers and using it to line the pockets of executives for big retail business. 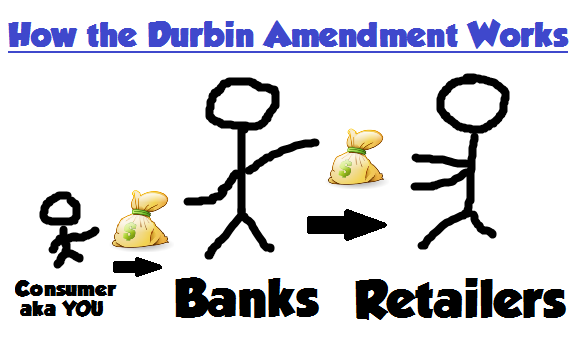 I’m no genius and I saw this coming a mile away. The politicians who voted for this garbage did it knowing full well that it would result in taking money from average Americans and giving it to business owners.

And there’s no turning back now. If you repeal the amendment, retailers are going to say, “Ahhh!!!! Expensive interchange fees!!! Must raise prices!!!” and banks will pretend like nothing happened (just like the retailers did this time) and decline to pass the savings along to customers.

What happens when the government tries to legislate who wins in a “free market”?