The Most Embarrassing Four Dollars I’ve Ever Spent

It was pleasant for a late afternoon in early fall in Dallas. The sun was still shining brightly, but the intensity of its rays had waned as the Earth’s favorite star dipped towards the horizon.  I had just completed a four hour marathon of Ultimate and was headed home to rest. Many people would refer to this sport as Ultimate Frisbee, but to those in the Ultimate community, there is one particularly nasty seven letter “F” word that shall not be mentioned. It’s just Ultimate.

I was within a mile of my apartment when I saw the most glorious sign posted outside one of the fine local dining establishments. The sign itself was of no particular beauty. Its 8.5 by 11 inch size was hardly visible from any measurable distance, and it’s tattered edges showed days of abuse from nature’s cruel elements. No, the sign itself wasn’t magnificent; only the message it conveyed.

The Chili Cheese Burrito is a gift from the heavens. “Ecstasy” is the only word that can describe the succulent mixture of cheese, something that tastes like beef, and a delicious yet mysterious liquidy flavoring, all wrapped in a tortilla that may or may not have been sitting out for a few hours. I would eat six in one sitting if I believed I could survive such a triumphant feat of gluttony. Alas, on this fateful day I ignored the disputes from my digestive tract and ordered two of these delectable dinner entrees, along with some cinnamon twists and a big Dr. Pepper. 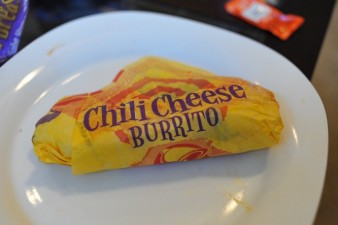 Wait until I get home? Pshaw! I destroyed the first burrito before pulling into my garage, a mere 0.7 miles from the Taco Bell. Within minutes of descending in front of my TV, the two burritos, a bag of cinnamon twists, and 32 ounces of soda were but pleasant memories of a satisfying and ultimately sinful meal. I quickly fell into the serenity and relaxation of an inevitable yet welcome food coma.

I awoke to my alarm approximately two hours and thirty-seven minutes later. I hadn’t set the alarm on my phone, and the alarm clock in my bedroom certainly wouldn’t ring for at least another nine hours. No, the alarm that disturbed my slumber came not from any audible sound in my apartment, but from an unmistakable tremble in my stomach.

I will spare you the gory details, but you must know this: the pleasure I had experienced only a few hours prior was equaled or, dare I say, exceeded by the discomfort I felt over the next few minutes. Or was it hours? Time seemed to have no meaning whilst in such wretched pain.

When I had finally exorcized the last of the demons from the depths of my bowels, and felt I had sufficiently atoned for my sins of indulgence, I depressed the silver handle in an attempt to rid my apartment of the vile stench that filled my nostrils and threatened my innards with a second round of torture. To my dismay, the offending excrement did not descend through the familiar clockwise path that leads away from my porcelain throne. Rather, it held firm to its position as the water level rose and threatened to spill out of its container onto the floor.

Water, originally my ally against a common adversary of filth, was now my biggest enemy. As each drop entered the bowl, I prayed the increased pressure would bring me a resolution, but the depths only rose closer and closer to the brim. “Oh please, stop… please… No!!!” I cried eloquently. With mere seconds before the bowl reached its capacity, I abandoned my verbal assault and frantically searched for a tool to assist in my battle against an unwelcome foe.

Just as I believed I would feel the cold, wet touch of my enemy between my bare toes, silence enveloped the room.

The water had ceased its attempt to dislodge the intruder just before it flowed over the edges of the holey chair. My toes had been spared.

The battle was won, but the outcome of the war was far from determined. And I didn’t have a plunger.

I immediately left my humble abode and traveled to Wal-Mart. I needed to purchase a weapon to vanquish my evil opponent once and for all. Upon exiting my vehicle, I caught a glimpse of myself in the reflection of the window.

On my face I wore the weariness of a soldier forced into battle against his will. The hair on the right side of my head was standing straight on end, courtesy of my slumber on the couch. Although it seemed like days since I had played Ultimate with my fellow comrades, in reality it had occurred only a few hours prior. I still wore the mud-stained clothes that had seemed so appropriate hours before, but now branded me as unkempt. Although I couldn’t see it in the mirror, I was certain my breath smelled of taco seasoning with a hint of Dr. Pepper. I was in no condition to have left my house, but I was on a mission. I could not be deterred.

I entered the store and quickly found the item I was looking for, ignoring looks from curious strangers. A black plunger made of plastic with a large compressible base for added pressure: $3.99. This would surely provide enough force to drive my adversary into the abyss once and for all. I grabbed the item and headed straight for the checkout. 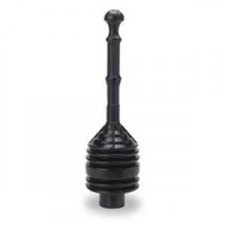 I approached the merchant with just my plunger, for it was the only item I required. I was then hit with the reality of my situation so bluntly, I almost fell to the ground. There is only one kind of person who makes a special trip to Wal-Mart for a plunger: someone who has an immediate and urgent need for said item.

There was no question this man would know exactly what awaited me at home when I handed him my selection. I sheepishly tried to avoid eye contact as he greeted me with a friendly, “Hello.” I was certain he had noticed the awkwardness of my walk as I shuffled to his counter; the product of irritating battle wounds suffered less than 30 minutes earlier. Filled with shame, I silently handed him the plunger.

“Did you find everything okay?” he asked. An innocent question. He probably asks it of all his customers; however, it felt… different. More pointed. Given my appearance and the painfully obvious reality of what awaited me at home based on my product selection, he seemed to be saying, “You missed the toilet paper in aisle 5. You’re also going to need some Tums if you want to make sure you don’t suffer round two, which are in the pharmacy section. You missed the cleaning supplies in aisle 9, air fresheners in aisle 12, and for the love of Pete go pick out some new clothes because the ones you are wearing will be forever tainted.”

Those words never escaped his lips; just a devilish smile. He feigned ignorance in an attempt to spare my dignity as he processed my purchase, but I knew better. My embarrassment could not have been greater if he had been there with me through the entire ordeal.

I forced a half-smile. “Taco bell…” I uttered quietly in an attempt to explain myself, but cut myself off before embarrassing myself further. I was unsure if my merchant had heard my pitiful explanation, as he was already in the process of helping the next customer with a huge smile on his face that I was certain would explode into laughter as soon as I was out of earshot.

I hope you liked my true-ish story of my most embarrassing purchase ever. If you made it all the way through 1,200 words of a poop story, I feel like I did a good job. I like to mix it up and do something a little different every now and then, and I thought a short-story theme would make this even funnier (and hopefully less disgusting) than it would have been as a regular blog entry. I had fun writing it, so let me know if you enjoyed the post. Also, I’d love to see some comments about if you’ve ever been embarrassed at a checkout counter (although let’s keep it PG-13 please).

This post was featured in the Festival of Frugality at Consumer Boomer.