The true cost of spending your retirement early

The true cost of spending your retirement early

My first, briefly-held job out of college had nothing to do with finances. In fact, I was so ignorant on the subject that I somehow failed to realize that one of the job’s very few perks was an automatic, employer-funded 12% annual contribution to a retirement plan. It’s a benefit nearly unheard of these days, and to my knowledge it is still available to employees. (Before anyone gets too excited, I should stipulate that my employer was a nonprofit, and the salary – even factoring in the extra 12% – was ridiculously low.)

Shortly after I had moved on, the retirement plan was liquidating smaller accounts in an effort to cut costs, and I received a check for $786. As a personal finance writer, I would love to tell you that I promptly executed an indirect rollover and that the $786 is worth much more today. Alas, it is not so. I, of course, spent my supposed windfall on something I can no longer recall, and was unpleasantly surprised with a tax bill at the end of the year. Live and learn, I suppose.

The mistake that keeps on taking

I had reason to recall this error in judgment recently, and I began wondering how much it cost me. Turns out, my $786 spending spree has so far cost me $1,388 in lost earnings (assuming a 6% annual return), plus nearly $200 in taxes and penalties in the year that I spent it. I have no idea what I spent it on, but I doubt very much that it needed it badly enough to justify sacrificing $1,588 in the intervening 17 years. And I am quite certain it pales in comparison to the approximately $10,000 it will have cost me by the time I retire.

It’s easy to see how a person could take this line of thinking way too far, so if you’re the obsessive type I recommend you limit this analysis to retirement dollars. But if you’ve ever thought of cashing out all or part of your retirement for anything less than a life or death emergency or qualified purchase (such as a first home), think again. 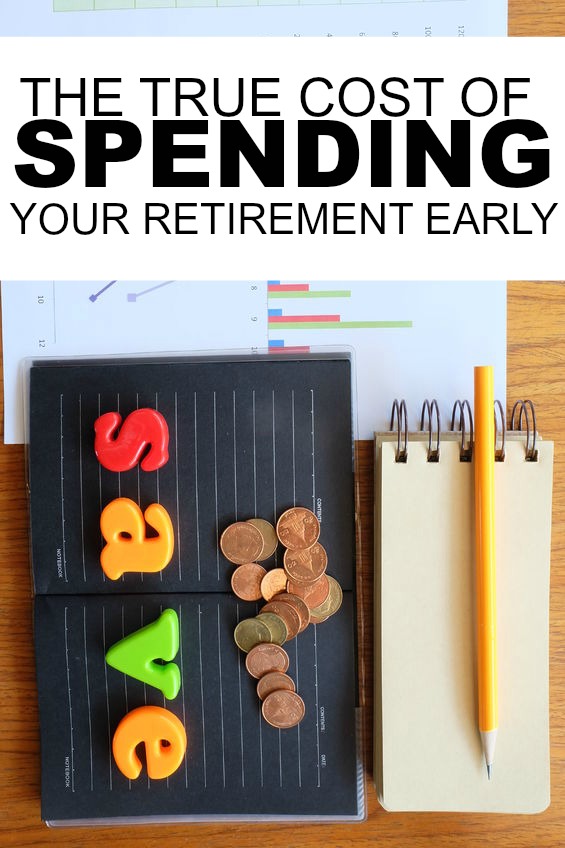 Consider, for example, a $10,000 distribution from a traditional IRA used to fund the “vacation of a lifetime.” The rationale is that the memories from such an experience will be priceless, so the cost is irrelevant. It would be interesting to find out if the vacationer feels the same way once he or she finds out that those “priceless” memories actually cost over $50,000 in taxes penalties, and lost interest (assuming a 6% annual return over 35 years.)

$50,000. Seriously. If you don’t believe me, do the math yourself. If you put that vacation on a credit card and paid the minimum, your total interest payments would be in the neighborhood of $5,000. One tenth the cost to your retirement nest egg.

The take away is rather obvious here, but I’ll say it anyway. If you are under age 59 1/2 , your retirement is about the last place you should look for extra cash. The sole exception to this would be if you are using a portion of your Roth IRA as an emergency fund, which, as I have written before, is only advisable under certain circumstances. Look for another option.