Why You Should Buy Junk Silver

Last week I invested almost $2,500 in a bag of American coins with a face value of $100. Sounds pretty stupid right?

Dimes, quarters, half dollars and dollar coins made in 1964 and consist of 90% silver and 10% copper. These coins are commonly referred to as junk silver. Yes, I spent about $2.5k on junk!

Don’t let the name fool you though; the “junk” designation just means the coins aren’t rare or collectable. They don’t have value as collectors items, but they do have value because of the silver content in the coins

Why Do I Need Junk Silver? 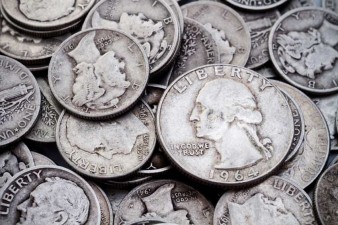 You might think I’m crazy for spending a few thousand bucks on silver coins. I think you’re crazy if you don’t.

Many Financial Advisors Recommend having 10% of Your Portfolio in Precious Metals – This is an easy one. Buying precious metals like gold and silver increases the diversification of your portfolio. There’s nothing ground breaking here; it’s just a smart, responsible financial decision.

For most people, investing in silver (or any precious metal) stops right there. And that’s great; diversification is important and is a good enough reason to invest in precious metals.

But if the economy starts getting really ugly and the world starts going a little crazy, you’ll be very glad you have junk silver stored safely in your home. Here are a few reasons why you might need junk silver in the future.

Prepare for the Worst

The Fed Won’t Stop Printing Money – The Federal Reserve prints money every day, which means every dollar you own becomes less valuable over time. Silver and other precious metals are a good hedge against inflation. It’s simple; for every new dollar that’s printed the dollars in your bank account are less valuable and your junk silver is more valuable.

America has about $15 Trillion in Debt and it’s Growing! – As of today, the United States federal government is in debt to the tune of about $15 trillion dollars, and that number grows every day. The only politician who has a serious plan to cut spending and balance the budget within a reasonable time frame of a few years (Ron Paul) is polling around 10% in the Republican primary. If he doesn’t win the presidency (which sadly seems unlikely), you can be sure American debt will grow more and more every year.

At some point, the government might start printing money to pay our debts, which would cause hyperinflation and the dollar could lose so much value it would become almost worthless. And if a dollar is worthless, many experts believe people will start bartering with junk silver due to its inherent value as a precious metal and the widespread existence of junk silver coins.

I know this sounds insane, but just take a look at Europe’s current debt crisis and you’ll see that this isn’t so far fetched. And speaking of Europe…

Europe Could Send the World into a Depression – Maybe you don’t believe America will cause a huge financial meltdown, but we still might be the victim of one coming out of Europe. Right now Italy is struggling to pay their bills and, as the eighth largest economy in the world, could send all of Europe and the rest of the world into a depression if they can’t get their act together.

In times of economic uncertainty, people turn to precious metals. At the very least your precious metals will increase in value dramatically. At worst, junk silver becomes the default barter currency in a global financial market failure and you are one of the few people to have any.

Nuclear War and/or the 2012 Doomsday Scenarios – The Middle East is a dangerous place right now and Iran is trying to develop nuclear weapons. Nuclear war between Israel and any of their neighbors (Iran [if they develop the weapons] or Pakistan) would not only have a devastating impact on human life and the planet, but would definitely send the world economy into a free fall.

Maybe Mitt Romney is elected president and follows through on his “bully China” rhetoric and starts a war with them. Maybe terrorists get a nuclear weapon. Maybe North Korea decides to bomb South Korea. It could all happen and precious metals will be extremely valuable in any of these cases.

And maybe you believe in the Mayan calendar or any of those other crazy things. In any situation where the world goes crazy, precious metals are the safest place to be.

It’s Better to be Safe than Sorry

But if something, anything, sends the world economy into a tailspin, and you won’t want a gold or silver ETF either; you’ll want that stuff in your house. You’re going to want precious metals

. And best case scenario, nothing bad happens and you’ve just diversified your portfolio with some precious metals. It’s a win-win.

If you want to buy junk silver, you’ll want to do some research. Mine started here at Free Money Finance in this interview with expert Doug Eberhardt. That article and some independent research led me to buy my junk silver at APMEX. I did cost comparisons among a number of sites, and APMEX had the best price on a $100 face value bag of 90% junk silver.

Other forms of silver, like silver bars and coins, are also offered as investments. Companies like U.S. Money Reserve Inc have gold and silver investments available, depending on which type of metal you choose.

As soon as my silver is delivered, I will talk about where to keep your valuables to ensure they are safe in the event of a fire, robbery, or oblivious kid looking for quarters for the gumball machine.