I am from the great city of St. Louis.

I’m proud of where I’m from, and there’s nothing a St. Louisan has more pride in than the St. Louis Cardinals. And despite last night’s gut wrenching loss, I’m still amazed by the fact that the Cardinals are in the World Series at all. 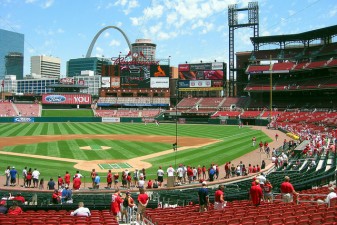 With about a month left in the season, the Cardinals were 10.5 games away from making the playoffs. If you’re not a baseball fan, that means there was approximately a 0.723% chance they would make the playoffs. Even if they went on a hot streak and won a bunch of games to finish the season, they would still need one of the teams ahead of them to have a monumental collapse.

At that point, winning games was no longer a matter of making the playoffs. The only realistic reason for this team to play hard was their pride. And that was enough for the Cardinals.

They played their butts off and won a bunch of games. At the same time, the Atlanta Braves forgot how to play baseball and lost just enough games for the Cardinals to make it into the playoffs.

Now St. Louis is in the World Series, and it’s all because they didn’t let their circumstance affect their effort.

Life can be pretty dang hard sometimes. Sometimes you try your best and come up short. Sometimes your best is truly better than anyone else, and you still don’t get what you deserve.

Maybe you worked your freaking butt off for the last 12 months to earn a promotion at work. You put in the time, executed flawlessly, and did everything right. Then your company decided to give someone else the job.

You could get disappointed and stop working hard, since it doesn’t seem to do you any good anyway. That is one option.

Or you could take that rockstar resume you made for yourself and apply for an even better job at a new company. Or better yet, you could start your own business and be your own boss!

Maybe you’re trying to pay down debt, and every time you seem to make some progress, something breaks on your car or some new medical expense rears its ugly head. You could resign yourself to a life of perpetual debt.

Or you could take on a second job. Or you could drastically reduce your spending. Or maybe both. Maybe both, plus a third job. It would be hard at first, but imagine how great it would feel to finally rid yourself of that debt.

We always have a choice. No matter what circumstances we find ourselves in, we get to decide how to respond to our situation.

I want to leave you with one of my favorite quotes. It is such an important part of my personal values that I’ve included it in my own personal mission statement.