Investments and Credit Cards Are Not an Emergency Fund

In November, Kevin called me a thief for writing about How to Use Personal Finance to Make Friends. I like Kevin and his songs, but today is my chance to get some revenge and let you know why I think he’s wrong about emergency funds.

Kevin posted on my site today and says Don’t Waste Money on an Emergency Fund, but I think that it’s not a waste, it’s in fact a necessity!

Kevin seems to think that an emergency fund is anything you would be allowed to tap in an extreme emergency. If your choices were between living on the street and paying the rent, is there any doubt you would draw some money from your retirement account to do it? 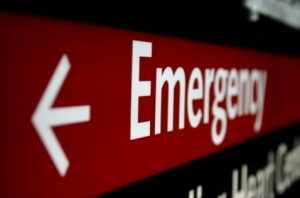 This way to the safest emergency fund available: a savings account.

However, there is a difference between taking action when you’re in a desperate situation and setting up an emergency fund around certain sources. I believe an emergency fund should be a specific savings account dedicated solely to provide money during emergencies. It shouldn’t be kept in a Roth IRA investments, and a credit card certainly isn’t an emergency fund. While these sound inviting and have some advantages, it adds a lot of risk, trouble, and the consequences can be more costly than what meets the eye.

Let’s explore a few different options and see whether or not they are viable options for an emergency fund.

The first reason a credit card is not good for an emergency fund because if you ever need to use it, you’ll be going into debt. You don’t have a cushion so instead of paying $5,000 to pay for the emergency, you’ll pay $5,000 plus interest until you can build up enough cash to pay it off. At 25% interest, if it takes a year to pay it off, that’s an extra $1,000 or so in interest, IF you can pay it off in under a year. Paying extra is not a good plan.

This plan looks pretty attractive: save in a Roth IRA, and if you ever need to, you can take out all of your contributions (but not the earnings!). With a maximum contribution of $5,000 per year, that could be a nice cushion should you need it, right?

Well there are some major drawbacks to keeping your Roth IRA as your emergency fund. If you’re going to count on the Roth IRA being there, it would be unwise to be as risky as you normally would with retirement investing (what the Roth IRA is meant for!), because a 50% drop in your emergency fund could happen at the same time you are laid off, right? Sounds unlikely? That’s what a lot of people said right before they got laid off when the market tanked.

What source would you tap if a drop in the market led to company layoffs? Would you be prepared?

Also, there is a slippery slope. At what point do you allow yourself to withdraw from the Roth IRA? Is it a disability or a job loss, or should it be used for college expenses, to pay down debt, or for that vacation you wan to take? Are all those things worth taking money out of your retirement fund, risking your long-term savings?

While Kevin suggests some ways to help avoid having to go to the emergency fund, there’s really no way to predict when disaster will strike. There’s no better way to prepare than to getting a low interest savings account, putting 3-6 months worth of expenses there, and just sitting on it. Sure, it’s not too sexy, but you’ll never have to worry about your backup plan and you’ll always have one thing that Kevin won’t: peace of mind.

If you’re in my boat and think a savings account specifically for an emergency fund is a good idea, let me know. If you’re willing to live life on the edge, check out Kevin’s article and let him know you support him. At the end of the week, we’ll add up the comments and see who wins. I’m pretty sure I won the first debate, so let’s keep this streak going!