How much is too much?

If we’re talking about St. Louis style pizza, then you can never have enough. But as much as I’d love to talk about that, I’m going to address a different topic.

I read a post on Rambling Fever Money and it addresses one writer’s view on the government’s role in welfare and welfare recipients’ rights. I will let you read the article in its entirety and then I’ll give you my take on it.

Put me in charge…

Put me in charge of food stamps. I’d get rid of Lone Star cards; no cash for Ding Dongs or Ho Ho’s, just money for 50-pound bags of rice and beans, blocks of cheese and all the powdered milk you can haul away. If you want steak and frozen pizza, then get a job.

Put me in charge of Medicaid. The first thing I’d do is to get women Norplant birth control implants or tubal ligations. Then, we’ll test recipients for drugs, alcohol, and nicotine and document all tattoos and piercings. If you want to reproduce or use drugs, alcohol, smoke or get tats and piercings, then get a job.

Put me in charge of government housing. Ever live in a military barracks?

You will maintain our property in a clean and good state of repair. Your “home” will be subject to inspections anytime and possessions will be inventoried. If you want a plasma TV or Xbox 360, then get a job and your own place.

In addition, you will either present a check stub from a job each week or you will report to a “government” job. It may be cleaning the roadways of trash, painting and repairing public housing, whatever we find for you. We will sell your 22 inch rims and low profile tires and your blasting stereo and speakers and put that money toward the “common good..”

Before you write that I’ve violated someone’s rights, realize that all of the above is voluntary. If you want our money, accept our rules.. Before you say that this would be “demeaning” and ruin their “self esteem,” consider that it wasn’t that long ago that taking someone else’s money for doing absolutely nothing was demeaning and lowered self esteem.

If we are expected to pay for other people’s mistakes we should at least attempt to make them learn from their bad choices. The current system rewards them for continuing to make bad choices.

AND While you are on Gov’t subsistence, you no longer can VOTE! Yes that is correct. For you to vote would be a conflict of interest. You will voluntarily remove yourself from voting while you are receiving a Gov’t welfare check. If you want to vote, then get a job.

No One Has a Right to Luxury

I’m all for restricting food stamps to just basic foods like rice, beans, milk, potatoes, veggies, fruits, bread, etc. Like the poster says, if you want fancy schmancy foods, get a job and buy them with your hard earned money. Eventually I’d like the see the government get out of the business of feeding people and leave it to the states and/or private charity.

If you want the government to give you money in the form of welfare, I completely agree that you have to work for it if you are able to do so. Either produce a paycheck stub showing at least 20 hours a week or the government can find you a job doing something. We shouldn’t be taking money from hard working taxpayers and giving it to people who are able to work but choose not to.

I see the writer’s point that our current system rewards people for making bad choices. We need to be stricter on who gets money, how much, and for what reason. In my ideal world all this aid would be provided by private charities and state government, but to make federal government assistance crappy is a good step in the right direction of ending it entirely.

I love the idea of drug testing welfare recipients because using illegal drugs is, well, illegal (whether it should be or not is another matter to discuss later). If you are currently engaging in criminal activity, I don’t think you should get taxpayer assistance for food, shelter and clothing.

But when you start restricting people from getting a tattoo, having kids, voting, or doing anything else that is legal just because they are poor and accepting aid is dangerous and disgusting. 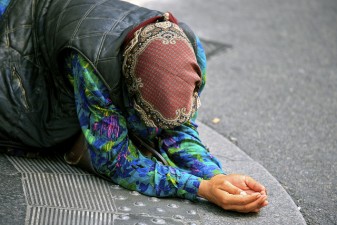 What if the government is oppressing people, manipulating the economy and making everyone poor; thus making it necessary for most people to accept aid? How would the poor majority ever get the corrupt politicians out of office without the ability to vote? This policy would very quickly turn our representative republic into a totalitarian state.

And what about babies? In the scenario described by the author, every person on government aid would either have a job in the private sector or be doing work for the government. I don’t want to live in a place where the government says a working person can’t have a baby because they are too poor. That’s eugenics at its finest, and it’s disgusting.

I want to be completely clear. The government can stop giving benefits, but someone who obeys the law should never be stripped of personal liberty under any socioeconomic circumstance. Never!

Government Should Never Infringe on Liberty of Law Abiding Citizens

A free person has the right to vote for his or her elected officials and the right to reproduce. A government that can take those rights away from law abiding citizens (even if it is “voluntary” on behalf of the citizens) is a government worth revolting against. Economic freedom cannot be achieved by stripping people of their social freedoms.

The only solution is one where people have unalienable economic and social freedom.