The Worst Company in America – Round One Recap

Have you ever seen someone else do something and instantly wished you had thought of it yourself? 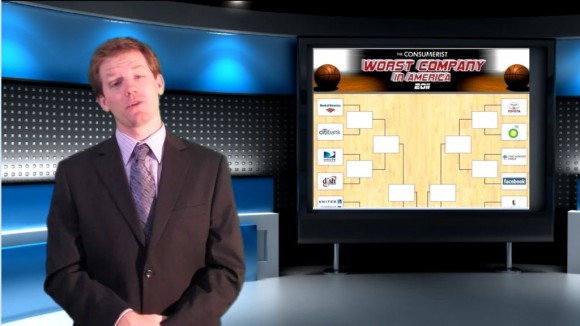 What could be better than a bunch of people getting together for about a month and complaining about the most egregious offenses committed in corporate America in the past year?

While I am upset I didn’t come up with the idea myself, at least I can play along and get in on some of the action. What is a March Madness tournament without a Sportscenter-like news report on each round? It’s a big pile of crap, that’s what.

So, I put my green screen and my new video making room to good use and made a little news report on the first round.

If you haven’t been following along with the series so far, I recommend you give the video a watch and then start following the action over at The Consumerist. Heck, you can even fill out a Sweet 16 bracket for this competition, since everyone knows you didn’t pick a single final four team in the basketball tourney.

There are tons of people at the consumerist that leave horror stories of bad companies, but those are all strangers to me. I want to hear some stories about the companies in this competition.

Who do you think is the worst company in America, and why?