What Is Your Passion?

The summer before my senior year of high school, I was dating a girl, Anne, and she asked me one of the deepest, most difficult questions I’ve ever been asked in my life.

“What is your passion?“ 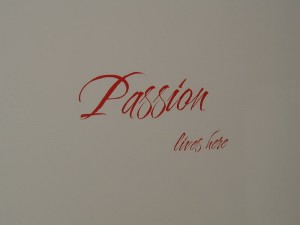 I didn’t have an answer.

Sure, I liked doing stuff. I played sports and had jobs and did well in school. But she wasn’t asking what I liked to do; she wanted to know my passion.

I spent a long time thinking about it, and I finally came up with my answer. My passion was winning. I’m going to avoid the stale Charlie Sheen references and be serious for a minute. When I really broke down all the things that were important to me at that point in my life, there was one thing I strove for more than anything else at the time, and it was winning.

Living My Passion Through Swimming

My desire to win was the reason I was on the swim team. Sometimes I was indifferent toward swim practice, and sometimes I downright hated it. I rarely enjoyed it. Some swimmers will tell you they love just being in the water; I never really liked practice at all. I only did it because I knew that with practice, I could win. And I did win.

I told myself before the season started my senior year that I would place in the top eight in the 100 breaststroke at state. It didn’t matter that I hadn’t competed in the 100 breast in high school since sophomore year, when I was 13 seconds away from a state qualifying time. Winning was my passion and I was going to be a winner.

In my first race of the season, I lost my to the kid who had placed sixth in state the year before. While I hated to lose, I was realistic enough to know I wasn’t quite ready to compete with him and that I would see him later that year at the state meet.

The next meet came, and I won. And then I won my next one. And the one after that. Whether it was a dual meet against five other swimmers or an invitational against 30, I didn’t lose another race that regular season. And with each victory, my desire to win grew even more.

Winning When It Matters

I had won all of my races after that first meet, and I had some good competition (my teammate was one of only 40 state qualifiers himself). However, the season would have been a terrible disappointment if I didn’t bring home the conference championship.

I went into our conference meet as the top ranked breaststroker, and then beat two other state qualifiers to win the conference championship. I also won the 200 IM to take home two individual championships from that meet, giving me a lot of confidence going into the State competition.

I’ll make a long story short about the State Meet, but I missed my original goal of the top eight by five-hundreths of a second. (One day I’ll tell that story in excruciating detail) I was, however, the first swimmer at my school to score points at the state meet and I avenged my only regular season loss by beating the guy whom I lost to in the first race of the year. While I was just shy of my ultimate goal, I knew that I had done something pretty awesome; something to be proud of.

My Key To Success: Knowing My Motivation

A lot of people love their sports because they love the game. Not me. My favorite thing about swimming was looking at all the guys around me on the pool deck and knowing I was better than them. I was very good at swimming because I knew my passion. While I liked the camaraderie and the physical fitness, those weren’t my goals. I was always focused on my passion: winning.

If Anne had never asked me that question, I don’t think I would have won so many races that year. Sure I wanted to be a good swimmer, but until I truly thought about my passion, I didn’t even know what was driving me.

My passion has changed many times since I was a swimmer in high school. While I still have a fiery competitiveness about me, winning is no longer may passion. However, I make it a point to ALWAYS know my passion in case anyone else asks.

I remember that question as if she asked it yesterday. It was absolutely one of the most powerful moments of my life. And now I pose the same question to you:

What is your passion?