I had lunch at Raising Cane’s Chicken Fingers earlier this week. From the time I ordered at the counter to when I sat down, I noticed four incredibly unique and innovative ways that this restaurant is saving more money than other fast food restaurants. While I don’t know if I would do all of these things if I owned a restaurant, I love how they are thinking outside the box to reduce waste and costs. And just to be clear, this isn’t an advertisement for Cane’s (although if someone from Cane’s wants to load up my Caniac Card with a free Box Combo, I wouldn’t mind). 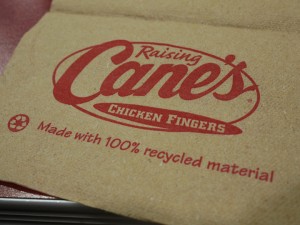 I hope you aren’t looking for variety at Cane’s, because this place sells nothing but chicken fingers. You can get three chicken fingers, four chicken fingers, six chicken fingers, or three chicken fingers sitting on a Kaiser roll with lettuce. (which they call a sandwich) Meals come with fries, Texas Toast, their special sauce, and coleslaw (sometimes). That is literally all you will find in their kitchen; they don’t sell anything else. Having such a small menu means they are buying in large bulk orders, which probably reduces costs. Also, their food will probably never expire and go to waste because as long as they have customers, they are selling chicken fingers and fries. The lack of variety means I don’t go there often, but when I do I know I’m getting some darn good chicken fingers.

They Only Sell Value Meals

You better go across the street to McDonald’s if you’re looking for the dollar menu, because you won’t find it here. They might sell you chicken fingers without the fries and a drink (I don’t know, I’ve never tried), but they definitely don’t post that on the menu. They just list four meals on the menu, plus some kids meals and tailgate boxes, and you pick from that. The bottom line is you are paying for chicken, fries, and a drink every time. Nobody gets away with free cups of water here. I’m sure it keeps their revenues up, but this is another reason I don’t eat here often. I like to drink water, but if I’m paying for a soda then I’m gonna drink it; therefore, I only go to Cane’s when I’m ready to treat myself to a Dr. Pepper.

They Fill Your Cup With Lots of Crushed Ice

Speaking of that soda, after you finish paying for your order the cashier will grab a cup, reach down under the counter, and fill it 3/4ths of the way full of crushed ice. The crushed ice takes up a substantial amount of volume in the cup, and you’re probably only getting 12 ounces of soda in a 24 ounce cup. Of course, you can dump the ice out (or add more if you wish) at the soda fountain, but I’m sure most people just use what’s given to them. More ice means less soda and it saves the restaurant on syrup and carbonated water. Who knew fast food could be so crafty?

Have you ever been filling up those little paper cups of ketchup at a fast food restaurant and had someone fall in line behind you? When that happens to me, I instantly start to speed up because I can feel that person behind me waiting their turn. I don’t want to keep them waiting forever, so I usually just finish the cup I’m on and call it a day. At Cane’s the ketchup dispenser is so slow, it literally takes about 15 seconds to fill one cup of ketchup. Where I usually get two or three to ensure I won’t have to make a second trip, I just get one at Cane’s. The best part is, the one cup is actually enough for my whole meal. This way I’m not wasting food and Cane’s isn’t wasting money on unused ketchup. This is a win-win for everyone as far as I’m concerned.

I don’t know if Cane’s fills your cup with ice because it probably saves them money, or if they are just doing it to be nice. The point is, I love that they are taking so many steps to reduce waste in their restaurant. The less food, drink, and condiments that end up getting thrown away or expiring, the less waste we are producing and the more profit the company brings in. So bravo Cane’s for thinking outside the box and making delicious chicken fingers.

Are you as impressed with these actions as I am, or do you think they are putting profits before customers?