Whatever Wednesday: Golddiggers and Stupid Committees

Every now and then I need some inspiration for an article. I could write the 8,243,412nd article about “10 ways to reduce spending”, but I know my readers don’t want that. If they wanted bland, generic articles, they’d go to CNN or somewhere else equally lame.

So instead of throwing my brain into overdrive and figuring out what my readers might like me to write about, I made it a lot easier on myself. I asked my twitter and facebook followers what they want. Here’s what I got: 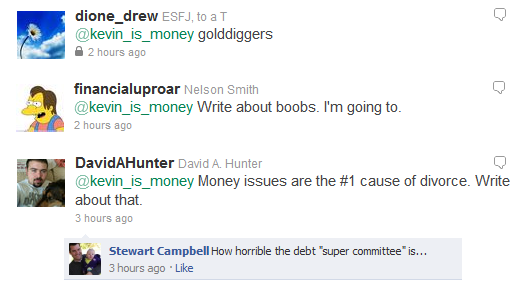 I find it interesting that three out of the four responses are at least vaguely related to relationships (“boobs” is a stretch, but I’m going with it). Maybe I’ve become a relationship/money expert after my most recent music video. Get me a TV show! I’ll be the financial Dr. Phil!

I do really like this idea of engaging with my readers and writing about whatever they want. And since I’m a fan of alliteration, I’m declaring Wednesday to be Whatever Wednesday from now on (until I change my mind).

On Tuesday nights from now on, I will ask for topic ideas on my twitter and facebook pages. I will always write about the first response from both Twitter and Facebook (so make sure to be the first!), and I’ll also pick anything else that sounds interesting. Sound good? Great. Let’s go.

Welcome to Whatever Wednesday!

Money Issues are the #1 cause of Divorce

I’ve heard this before, and I have two theories that I can’t support with any data.

Theory #1 – In low or moderate income couples, I believe a lack of money makes people unhappy in general. Then I think this general unhappiness can cause divorce. I’ve been dirt poor earlier in life, and I’m currently doing pretty well financially. I can tell you with a great deal of certainty that having money to pay the bills makes life easier. So if you don’t want money to break up your marriage, make sure you have enough of it that you can pay your bills comfortably.

For example, sometime people disagree on how much to spend on a sick pet. The key to ensuring money doesn’t become an issue in a relationship is to make sure husband and wife agree on most priorities and have discussions about where they differ BEFORE marriage or keep separate accounts during marriage.

These things can be huge money savers for women! They help ladies avoid cover charges and/or earn free drinks at a bar. When used properly, they can get a lot more out of a guy than just a few drinks (see the golddigger section below). And most importantly, they are a natural way to avoid buying baby formula!

On the down side financially, ladies have to buy bras. They also might want to “enhance” their chest, which costs thousands of buckaroos. And women have the unfortunate distinction of a much higher probability of getting breast cancer than men.

Overall, I can’t decide if boobs are a financial positive or negative. But I have decided that I’m glad they’re there.

Speaking of boobs and using them to get money, some women make their living on doing just that. And call me crazy, but I say more power to them. 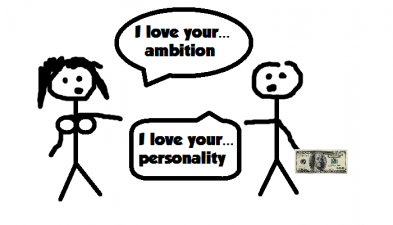 Let’s be honest; there are no “undercover” golddiggers. When a female decides money and gifts are the most important thing in a relationship, she makes sure men know it. No woman starts at “Let’s just eat Ramen Noodles to save some money” and changes to “WHAT!? Only a 6 ct. diamond ring? Unacceptable!”

If a man is with a golddigger, it’s because he decided to be. I’d never personally date a golddigger (and I know for sure a golddigger would never date me) and don’t really understand why any man would, but if two people decide to be in a relationship and both are forthcoming about their expectations, then who am I to judge?

Stewart thinks this committee is “horrible” in his own words. I think it’s laughable.

They are supposed to find $1.2 trillion in savings against the budget over the next 10 years.

So we have a national debt of $15 trillion dollars (100% of our GDP), and annual deficits of well over $1 trillion from 2009-2011. The deficit in 2012 is projected to be over $1 trillion, and the only reason projections say the deficit will reduce to around $700 billion in 2013 is because estimates are expecting a huge economic recovery and increased tax revenues. I’d say we’re realistically looking at between $7 and $10 trillion in deficit spending over the next 10 years.

And this commission is only trying to find $1.2 trillion over that time frame? Is there a point to this?

Does anyone really think there’s a practical difference between $7-10 trillion or $6-9 trillion of deficit spending over a decade? If you do, you might want your head examined.

We need to make a decision as a country. We could go full communist, start taxing everyone 50% and balance the budget with massive spending and taxes. Or we could go the way our founding fathers intended and reduce the size of the federal government, giving power back to the states, and cutting spending while people keep more of the money they earn. I prefer the latter.

But to think that the government can spend like communists while the citizens are taxed like a free market society is completely and utterly insane.

EDIT: For a real plan to reduce the size and scope of the federal government, including $1 trillion in cuts in ONE YEAR, check out Ron Paul’s Plan to Restore America.

This Super Committee is more like a Stupid Committee.

There’s my first Whatever Wednesday and I had a lot of fun with it. I’m definitely doing it again next week, so make sure to keep an eye on twitter and facebook next Tuesday and tell me what to write about!