It just hit me the other day: my 10 year high school reunion is this year. Woah!

So I’m officially not a kid anymore. I have some gray hairs, I can’t workout for more than 30 minutes without feeling like I’m gonna die, and it’s been a decade since I was in high school.

When I think back to 10 years ago I was a starry eyed kid. I knew I was going to go to school, get a great job and be a millionaire. And I was going to do it all before my 30th birthday.

Now the reunion is here and I’m certainly not a millionaire. Heck, I’m not even a hundred-thousandaire (although I’m getting kinda close).

I do consider myself a “success”. I have a great job that pays me a healthy salary. I am engaged to be married next year. I have a great dog. I have an engineering degree from one of the best schools in the country. I own a house. I am active at my church. Heck, I even have a blog.

There are lots of ways to measure success, but if we are measuring success by net worth then I imagine a lot of my classmates will be more successful than me.

Let’s arbitrarily define a net worth of $100,000 as “successful” at your 10 year high school reunion. It definitely means you are well ahead of the financial curve in this country.

If you are worth $100k by the time you are 28 years old, I think it’s safe to say you are a financial success. Sadly, I’m not there yet.

But let’s see what it would take to get there following a two different career paths.

Manager at a Pizza Restaurant

I worked at a pizza restaurant in high school with a bunch of my classmates. Many of us left the restaurant to go to college or find other jobs, but my friend Nick stayed there. He was there 5 years after graduation and he might still be there today if they hadn’t closed down.

While many of us were taking out huge loans to go to college, Nick was simply working. He had been working at the restaurant for a long time and had gotten a few raises. Let’s pretend that his average hourly wage over 10 years was $15 an hour. 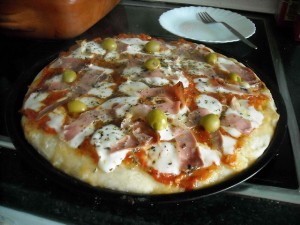 At this point they have $100k saved up and maybe they are ready to start their own pizza restaurant. Now instead of making $15 an hour their earnings are only limited by the amount of business they can do with their restaurant. If they decide to become entrepreneurs then their earning potential is huge moving forward.

The other popular option for myself and my classmates was to go to college. Most of us took out huge loans to attend school in the hopes that we would get high paying jobs.

Take me for example. I had about $35,000 in student loans when I graduated. Remember Nick? He and his wife might have had $50k saved up after five years. I was at negative $35k. Not good.

Maybe like my friend I marry a beautiful woman (which I will do next year). The problem is my beautiful wife also has student loan debt. And what if my future wife’s college degree didn’t lend itself to a $60,000 salary?

Now my wife is making about the same as the restaurant managers, but she spent 4 years accumulating debt instead of working. It will take her years to pay for living expenses and pay down her loans before she even breaks even.

The bottom line 10 years after high school: Having $100k in net worth is extremely hard for anyone who took out loans to pay for college. It is possible if they have a very high paying job or if they didn’t need loans to pay for school.

The future earning potential for the college grad is probably pretty good, but not necessarily any better than an entrepreneur about to open a restaurant.

There Are Many Paths to Financial Success

I know if I show up to my high school reunion and stand next to Nick, people will probably look at me as a success and him as just another guy living paycheck to paycheck.

That may be the case. Or it may be that Nick has a greater net worth than me, and greater earning potential as he starts his own small business.

So what’s the point?

When and if I go to my high school reunion, I will NEVER look down on someone for working the same job they had 10 years ago. There’s a good chance he or she is in a better financial position than I am.